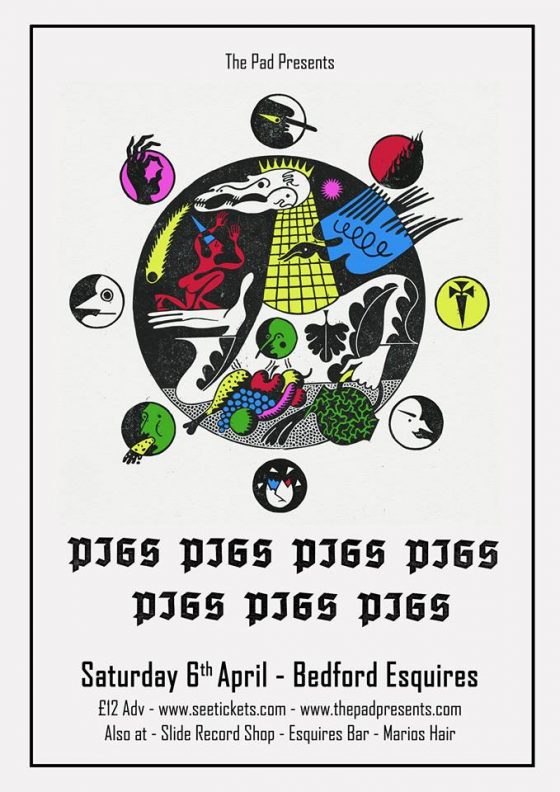 One of our favourite new bands are coming to play for us, what more could we want?! Pigs x7 are a glorious concoction of Sabbath-esque drone rock, with punk sensibilities. The band have been splashed all over the radio, with heavy rotation from 6Music and selling out shows all over the UK to boot!

Seven is the magic number. What’s more, this is about more the number of days in the week or continents in the world – psychologists have theorised that the human memory’s ability
to calibrate information on a short term basis is mostly limited to a sequence of this length.

Thus, it seems strangely fitting that Pigs Pigs Pigs Pigs Pigs Pigs Pigs – the Newcastle-based maximalists whose riffs, raw power and rancour have blazed a trail across the darker quarters of the underground in the last five years – have made a second album in ‘King Of Cowards’ which does its damnedest to take consciousness to its very limits.

Moreover, another notable seven is dealt with here – that of the deadly sins. As vocalist and synth player Matt Baty notes “In terms of how the theme came together I’d relate it to throwing paint at a canvas in a really physical and subconscious way, then stepping back to analyse it and seeing it all as one piece. It wasn’t until then that I saw there was this continual thread of sin and guilt in the lyrics throughout the album” For a long time I’ve questioned how and where guilt can be used as a form of oppression.

When can guilt be converted into positive action? After typing all of the lyrics up I realised I’d unwittingly referenced every one of the seven deadly sins throughout the album. That’s my fire and brimstone Catholic upbringing coming into play there!”

The period since Pigs’ Rocket Recordings 2017 debut ‘Feed The Rats’ – a mighty tsunami of rancorous riffage and unholy abjection that wowed critics and wreckheads alike – has seen the band build on their incendiary live reputation far and wide, from the sweatiest of UK fleapits to illustrious festivals like Roskilde. The band are perhaps the most relentlessly head-caving outfit of an alarmingly fertile scene at the moment – Make sure you don’t miss them.