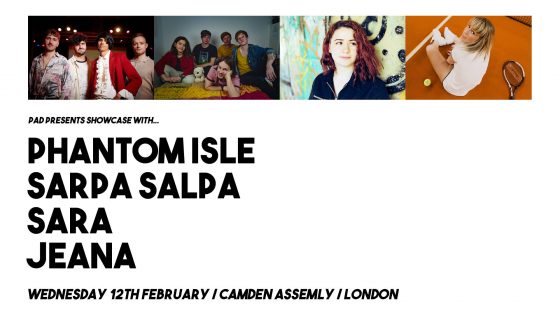 Following the success of our 2019 showcase The Pad Presents heads back to North London on Weds 12th Feb for what is now its annual fixture showcasing the best talent passing through our various venues and management stable.

PHANTOM ISLE
“Phantom Isle have an edge to them which is reminiscent of some the ’70s greatest pop rock groups, blending some soft vocals with heavy guitars and synths – No denying these guys have a serious ear for a great chorus melody and utilise it well alongside their darker and more heavy side” – Bittersweet Symphonies
Raised in Northampton but now based in London, childhood friends Peter Marchant (Lead Vocals and Guitar), Sam Thorne (Drums), Joshua Pullen (Synthesisers) and Jonny Longland (Bass) known collectively as Phantom Isle are already beginning to generate buzz in the capital despite the recent tragic loss of founding member and sibling Matt Marchant. Slathered in psychedelic sun-drenched guitars, soaring vocals and spacey synths reminiscent of Tame Impala and Mac Demarco, with the raw energy and weirdness of New Wave artists like Talking Heads and The Stranglers and stadium choruses that wouldn’t sound out of place coming from the likes of Bowie or Queen; BBC Introducing are calling Phantom Isle one of the most exciting new acts in the UK.

SARPA SALPA
Following a trio of impressive singles in 2019 Sarpa Salpa unleash their debut EP “Say Something” on Friday 3rd January 2020. The lead track of the same name; “Say Something” sees the band crank up the tempo and return to their indie dancefloor roots with a stomper of a synth powered banger which has had crowds at their live shows hooked from the opening bars.

Marcus, George, Ethan & Charlie have recently been joined by Meg on Keys bringing in another layer to the live show, the band take EP on the road around the Uk for a run of dates in Jan & Feb.
“I’ve been loving this one recently” “What a tune”
Jack Saunders – BBC Radio 1

SARA
‘Little Nerves’ is the stunning debut single from Sara, an upcoming singer, songwriter and multi-instrumentalist from Hertfordshire via Mozambique. Taking inspiration from artists like Frank Ocean, Sufjan Steven’s and Bon Iver, Sara’s music is inherently melodic, but she utilizes unusual arrangements and displays of lyrical vulnerability,

touching on themes of mental health, loneliness and sexuality. Fans of contemporary talents like The Japanese House and Shura should find much to admire in 23-year old Sara’s thoughtful but never over-earnest songwriting. “Little Nerves is about being trapped in the purgatory of another person’s feelings and the intense, drug-like
emotion you experience when your own are reciprocated,” says Sara of the single. “Musically, the song uses smooth bass lines and fragmented drumbeats to create a sense of anticipation and confidence. The general mood of a homecoming and desire for relief was also in part inspired by a line from The Great Gatsby: ‘..his dream must have seemed so close that he could hardly fail to grasp it.’”

Originally from Hemel Hempstead, Sara spent much of her childhood in Mozambique where she was lucky to survive the 2007 Maputo arms depot explosion, when a Russian arms depot self-destructed in the intense heat, with missiles landing just metres from where she and her family took shelter. Lucky to survive when others did not, this event changed Sara and drove her to create and express herself in order to cope with the trauma.

Sara’s musical output began with the release of her home recorded lo-fi EP ‘Haunt’ in 2017. With no press or plugging, she received track of the week from her local BBC Introducing while racking up plays of nearly half a million on Spotify. The subsequent 18 months has seen Sara go through a creative burst that has nurtured over 50
increasingly accomplished songs, while developing more expansive sound following the addition of two live musicians. She has also completed her first studio session, of which ‘Little Nerves’ is the first release, with more material to follow in early 2020.

Despite her off kilter, RnB sound marking her as different from other singer songwriters, JEANA became a significant new music success story with her debut single.
Infiltrating radio, her first single was applauded by taste makers including John Kennedy at Radio X and Jordan Scudder at Amazing radio.

Now back with her new single ‘Nameless’ and forth coming EP, JEANA hopes a larger body of work will allow listeners to connect with her music which tackles life, love and personal loss.
Jeana is a child prodigy of sorts. At age 12 she was writing songs way beyond her years. Her initial 4-track demo, which she recorded with her brother & sister, caught the eye of major producer Kristopher Harris (indoor pets, Bears Den, Ghost Poet). Soon she was in the studio with brother and sister recording their debut single under the name Healyum.

The breakout single received rave reviews and support from Line of Best Fit, BBC Radio 1, Radio X. At 15 she was on the road struggling to balance all the challenges of being a teenager along with the demands of a promising music project, all the while feeling the underlying pressure of not wanting to let her older siblings down. With her relationships between brother and sisters becaming tense and the increasing pressures on a talented artist at such an early age, she fell out of love with music and became difficult and isolated.

Now at 19, she’s working side by side with producer Ginger Snaps on producing something ‘of worth’.

“2019 kicks off with an unbelievable catchy banger from JEANA… Already a BBC introducing favourite, she is certainly one to watch.”- Lal Muttock, BBC introducing

“Soulful and shadowy in equal measure, with pop earworms ready to burrow themselves deep into your brain”- The Line Of Best Fit

Tickets £6 Advance from Seetickets / Over 18’s only