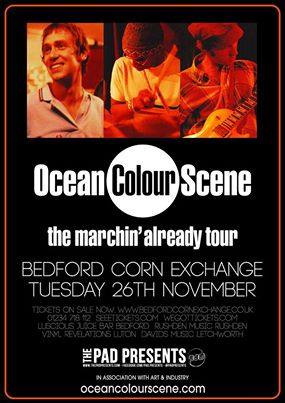 When Ocean Colour Scene’s Marchin’ Already was released in 1997 – promptly dislodging Oasis’ Be Here Now from the Number One spot – a mysterious package arrived at the band’s door. Inside it was a plaque from Noel Gallagher engraved with the inscription: ‘To the Second Best Band in Britain.’ Far from being insulted, guitarist Steve Cradock took it as a compliment, saying: “It’s an honour to be described as Britain’s second best band – ahead of Oasis but behind the Beatles.”

Sixteen years on, and with Oasis seemingly no more, OCS are ready to re-live their finest hour – playing Marchin’ Already in full.

Many of the songs from that record have become etched into the public consciousness. From the heavy riffing of Hundred Mile High City (famously used in Guy Ritchie’s Lock, Stock and Two Smoking Barrels) to the Beatlesy ballad Better Day, to the soulful stomp of Travellers Tune, they’re tracks that have stood the test of time – much like the band themselves.

For OCS, the Marchin’ Already marks the highpoint of a career that saw them rise from Breton shirt-wearing Stone Roses disciples to one of Britpop’s biggest-selling bands (their 1998 arena tour was the biggest by any UK group that year). In their 23 years together, they’ve enjoyed five Top 10 albums, six Top 10 singles, a mantelpiece full of awards, and countless sell-out tours.

One of these, back in 2011, saw the band play their seminal Moseley Shoals album in full. If the reaction to those gigs is anything to go by – rave reviews, full houses, mass sing-alongs – then the Marchin’ Already Tour promises to be the next stride forward in the band’s remarkable career.

What’s the story? Ocean Colour Scene are about to remind everyone – Noel included – just how good they are.

*PLEASE NOTE* There is no support band on the night instead Ocean Colour Scene take to the stage at the early time of 8pm to perform the’ Marchin’ Already’ album and following a short interval will return for a ‘Greatest Hits’ set.