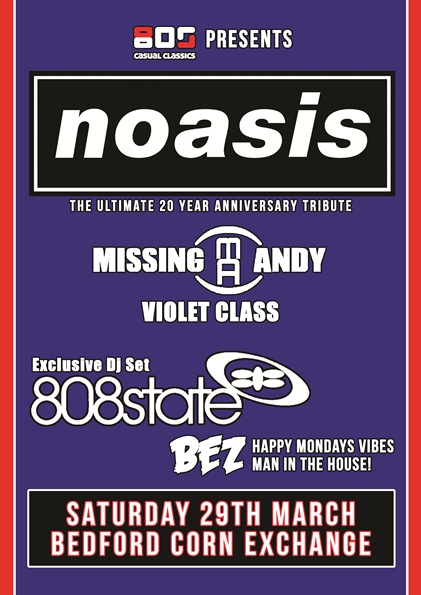 March 2014 is 20 years since Oasis first proper tour kicked off in the small town of Bedford. The show was promoted by the founder of 80sCasual Classics and later the band stopped off for a fresh injection of original retro dead-stock Adidas trainers from there store.

With no Oasis reunion on the horizon Noasis are the perfect choice to fill the void and to celebrate the 20th anniversary of the shows and the release of debut long player ‘Definitely Maybe’, the obvious headline booking of choice for March 2014. This night is coupled with a full supporting line up of DJs & bands, the bill complementing the headliners and in turn making the night much more than just a gig

Missing Andy – come highly recommended by members of the 80s Casual Classics Facebook forum. These guys pack a modern energetic sound with a taste of UK heritage and a nod to Urban Britain & Old Skool values packing out UK clubs on their own on the live circuit these guys are the perfect and obvious choice for the main live support for the evening.  No strangers to Bedford the band have 3 sell out shows under their belt at Esquires and a big local following.

Violet Class  – Young and up and coming rock and rollers, the lads gave Liam Gallagher a salute turning up to play his Pretty Green stores decked in Fila, Tacchini and Ellesse. The band recently graced Cass Pennants Casual’s live night at The Garage in London and a bagged a support slot at the forthcoming Liverpool gig with The Charlatans.

Very Special guests: 808 State (DJ set) Party On – Main DJ support for the night come courtesy of Manchester’s finest 808 State who will close the event in the main auditorium following . some anthem sing-alongs from anOasis set earlier in the evening then the DJ’s taking people back to 1989-90 when the rave and Indie dance scene kicked off, think Hacienda, Happy Mondays, Roses, Weatherall remixes.

The event will open with a pre-bar meet up at the number 13 bar at the venue from 6pm with DJ guest t.b.c and the doors for the main auditorium will open at 7.30pm until 1.30am with the first band taking the stage just before 8pm and 808 state closing the evening.

There is a further after-show party planned for the event to be announced nearer the time.

Tickets are on sale now priced £20 in advance