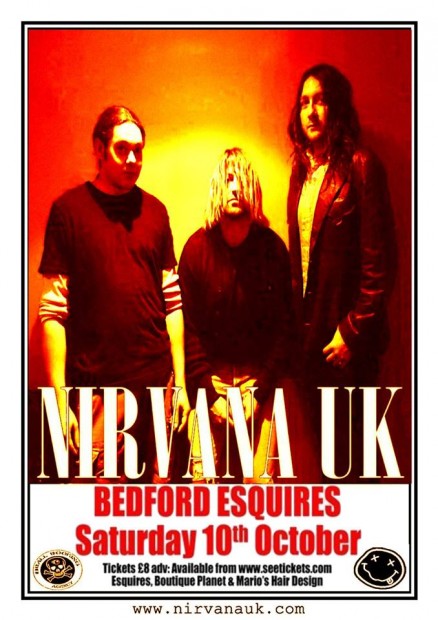 Nirvana UK + guests
Saturday 10th October
Esquires, Bedford.
Nirvana UK are a Touring Nirvana tribute band that are based in the west midlands and are formed of 3 die hard Nirvana fans who love nothing more than re creating Nirvanas live music their look for other fans. The band strive to be as close to the real deal as possible. Including the same instruments, effect boxes and pre amp that Kurt Cobain used to ensure they re-create the distinctive Nirvana sound.The band is made up of ;Jez Fox – Kurt Cobain
Dan Callaghan – Krist Novoselic
Ross Hancox – Dave Grohl…Nirvana’s UK sets include the whole spectrum of Nirvana’s live and studio catalogue….. not to mention the standard Nirvana style anarchy and abuse of gear at the conclusion of each show.
So if you like Nirvana, or just want to re live your youth, come as you are and check them out…. you wont be disappointed.