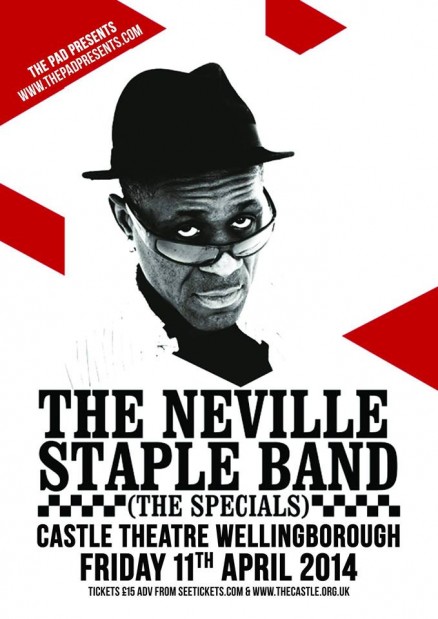 The Neville Staple Band (The Specials) + The Scruff + Karl Philips

The Neville Staple Band from featuring the legendary vocalist / toaster from The Specials makes his debut performance with his full band at The Castle Theatre for a headline show as part of his spring tour for 2014.

Best known for his work as the singer and toaster in Ska and Two Tone legends The Specials, Neville’s solo tour features a selection of The Specials back catalogue such as Gangsters, A Message To You Rudy, Monkey Man, Ghost Town and Night Club along with tracks from his second chart topping band The Fun Boy Three as well as reworking some original Jamaican ska classics and showcasing brand new original solo material. Get ready to skank ‘cos the king of Two Tone and ska is back ready to party!

Support on the night comes from an exciting young band from just down the road. A sartorially elegant three piece from Bedford, England, The Scruff are steeped in the English tradition of quirky guitar-pop, evoking the classic song writing of The Kinks and The Jam, the prime Brit-Pop hooks of Blur and Supergrass with a little Two Tone swagger thrown into the mix.

Open proceedings will be Karl Philips and the Midnight Ramblers