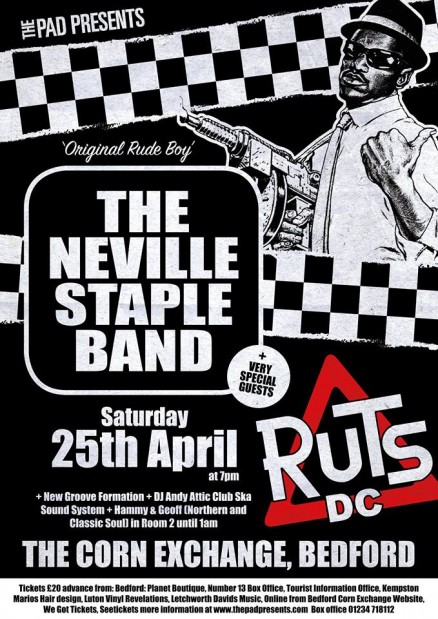 A big big line up for 2015 as The original rude boy NEVILLE STAPLE from The Specials returns to Bedford Corn Exchange for the annual St Georges day show with the Classics Ruts DC as very special guests.

Best known for his work as the singer / toaster in Ska and Two Tone legends The Specials, Neville’s solo tour features a selection of The Special’s back catalogue including “Gangsters”, “A Message to you Rudy”, “Monkey Man”, “Ghost Town” and “Nightclub” along with tracks from his second chart topping band The Fun Boy Three as well as reworking some orginal Jamaican ska classics and showcasing some brand new original solo material.

For anyone who doesn’t know, Neville Staple is one of the great figureheads of the second wave of British ska that broke across the nation’s music scene in the late 70s. Alongside Terry Hall and Jerry Dammers, Neville Staple was at the centre of perhaps UK ska’s most-loved bands The Specials.  The band had seven consecutive top 10 hits between 1979 and 1981.

When The Specials broke up, Neville formed Fun Boy Three with Terry Hall and Lynval Golding, and over the two year life span of the band they had six UK top 20 hits including The Lunatics (Have Taken Over The Asylum).   Following on from the massive Specials reunion back in 2009 to 2012 Neville has since left the fold and released a brand new album  the band album in the spring of 2014 ‘Ska Crazy’ to rave reviews.

Expect all the hits and more from one of ska’s most loved artists – Get ready to skank ‘cos the king of Two Tone is ready to party!

Putting together a bill for the 2015 event there was one band we really wanted on the bill and luckily we have been able to tie everything together as our very special guests for the evening are the brilliant Ruts DC.

Ruts D.C. were formed in 1980 by guitarist Paul Fox, bassist John ‘Segs’ Jennings and drummer Dave Ruffy. With vocalist Malcolm Owen they had previously been The Ruts, one of the best loved bands of the punk rock era, releasing several fine singles (including ‘Babylon’s Burning’ which earned them a silver disc) and two much-acclaimed albums ‘The Crack’ and ‘Grin And Bear It’. Musically they were always more ambitious than many of their contemporaries, mixing reggae and rock in a manner that still influences musicians today; lyrically they reflected their uncompromising support for causes such as Rock Against Racism.  Classic singles included Staring at the Rudeboys, Jah War, In a Rut and Babylons Burning..

Following Malcolm’s untimely death the three musicians regrouped, adding the musical term D.C. (from the Latin for ‘from the beginning’) to the name. Their first album ‘Animal Now’ is regarded by many, as a lost classic, whilst their ground breaking second release ‘Rhythm Collision Volume 1′ saw the band collaborating with dub producer Mad Professor on an album that is still seen as a pioneering excursion into what was then a relatively unknown style of music. Despite critical acclaim the band folded in 1983

In the interim years Segs and Dave have worked separately and together with some of the biggest names in the music industry but now in 2014 The Ruts D.C. are back touring again and are the band are due to release the long-awaited ‘Rhythm Collision Volume 2’album
Rewind back to the 2011 the first Pad Presents Ska Fest featured home grown favourites New Groove Formation.  With a new album ‘Summer in a glass’ launched in summer 2014 the band played just about every festival in the UK cementing their reputation as one of the best touring bands on the circuit.

On the DJ front we welcome DJ Andy Attic from the Club Ska Sound system to entertain the main auditorium and no St Georges Day event would be complete without DJ’s Hammy & Geoff playing Northern and classic Soul in the Howard Room 2, during and after the bands until 1am.

Tickets are on sale priced £20, doors open at the slightly earlier time of 7pm