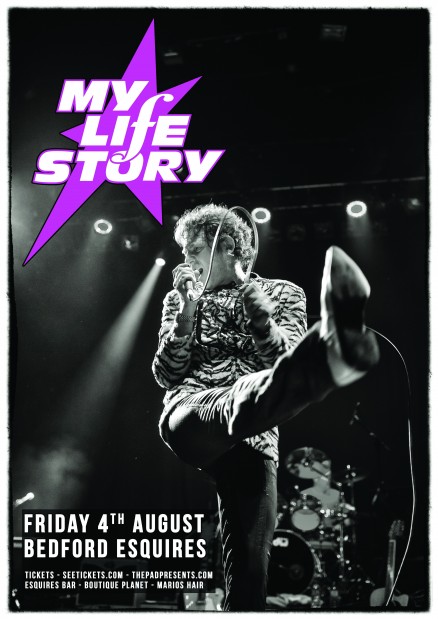 Underground legends of the 90s Britpop movement, My Life Story are coming to the main stage at Bedford Esquires as part of only a handful of dates on Friday 4th August.

Their debut album Mornington Crescent was released to critical acclaim on the same label and MLS toured extensively in the UK and France, headlining over Oasis and supporting both Blur andPulp. In 1996, MLS signed to Parlophone and released their second album,The Golden Mile.     All five singles from the album became top forty hits including 12 Reasons Why I Love Her, Sparkleand Strumpet.

The My Life Story orchestra were in high demand during the Britpop era, with notable appearances on the Morrissey track Interlude, and collaborations with Marc Almond and PJ Probyon the 1996 album Legend.  1999 saw the release of If You Can’t Live Without Me, the first ever internet single.  The third and final album Joined Up Talking was released in 2000, and the band called it a day shortly after their sixth top forty hit Its a Girl Thing. Now Jake runs his own label ‘Exilophone Records’ and has begun to re-release much of the now deleted back catalogue as well as his own material.

Tickets are on sale right now from Seetickets and will be available locally from Esquires Bar, Boutique Planet & Mario’s Hair Design. This is a 14+ ages show, under 16s to be accompanied by an over 18.