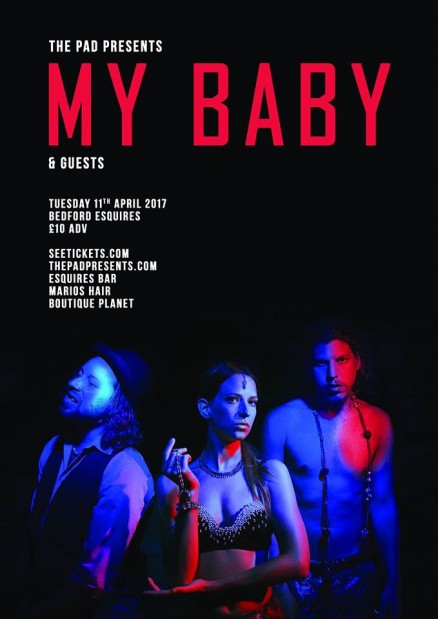 We see a hell of a lot of bands over the space of a year, but this year our favourite Pad outing was heading over to a packed Hitchin Club 85 show on a warm summer Thursday night to see a band who completely blew us away, that band were My Baby.
This is hands down the best live band we have seen in recent times, and even though it’s a Tuesday night, you need to make sure you catch them, promoter promise!
The Amsterdam band are coming back to the UK in 2017 for a new tour. The band recently announced they have finished recording their third album and will release the “Shamanaid” successor in March. The new album will be the basis for a complete new show: “Prehistoric Rhythm”.

In these times of turmoil and this busy and ongoing society that we live in, humankind is searching for a new way to go back to their primal awareness. MY BABY takes the audience on a “Shamanic” journey you have never seen before. The combination of light, visuals and music does so much more than just bringing the album to life, it enchanted the audience for the rest of their lives.

After their second album that caused their international breakthrough and that got rewarded with an Edison, they teamed up with British producer Sam Wheat for this new chapter. Sam: “MY BABY does something different and unique in this fast and modern music scene. It was an absolute pleasure working with them!”

In the past years, MY BABY made a great name for themselves in the international live circuit. They played at some of the biggest festivals in Europe, such as: Paaspop (NL), Lowlands (NL), Down the Rabbit Hole (NL), Pohoda Festival (SK), Gentse Feesten (BE), InMusic (SI), Exit Festival (RS), Colours of Ostrava (CZ), Camp Festival (UK), Shambala (UK) and Secret Garden (UK). They did 14 support shows during Seasick Steve’s 2015 UK Tour, played Glastonbury 2016 seven(!) times and are currently on a 10-show tour in South-Africa.

Tickets are £10 advance from Seetickets and in person from Esquires Bar,Boutique Planet Boutique and Mario’s Hair Design. This is a 14+ ages show, under 16s need to be accompanied by an over 18.