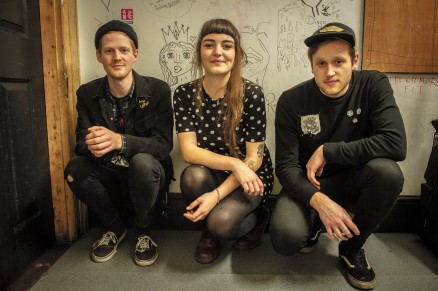 Muncie Girls return to Esquires on Friday 21st April! Last seen supporting Tellison on the main stage, the Exeter based 3 piece have been on a huge nationwide tour with Taking Back Sunday and Frank Iero and return back to Esquires as part of their latest UK headline stint.

Muncie Girls released their highly acclaimed debut album ‘From Caplan To Belsize’ on 4th March, 2016 via Specialist Subject Records in the UK. Animal Style Records released the album in the US and Uncle M had the honours over in Germany. The record has received much attention and plaudits from the likes of Kerrang!, Rock Sound, Upset, Noisey, DIY, The Line of Best Fit & Punktastic. Muncie Girls were also nominated for ‘Best British Newcomer’ at the Kerrang! Awards 2016. Recent singles have received plays on BBC Radio 1, Kerrang! Radio, Amazing Radio & Scuzz TV.

Born in punk shows and dive bars to three driven teenagers in 2012, Muncie Girls embodies the classic punk rock story in a modern context. Fuelled by discontent and anxiety, they eloquently address issues of modern living as a self-aware young adult. The result is an ambitious and poignant rebellion against social norms that touches on everything from politics to interpersonal relationships. Musically, the album is a dynamic and emotional exploration of punk and indie rock. The album’s bouncy catchiness is sure to be a hit with fans of Hop Along, Lemuria, Latterman, and RVIVR, but one of the defining characteristics of Muncie Girls is their ability to explore outside their immediate influences. Ultimately, what sets Muncie Girls apart is vocalist & bassist Lande Hekt’s unique perspective and its impact on her understated lyricism. Hekt’s dry, unembellished writing style is, in many ways, reminiscent of classic American literature – a trait exceptionally unusual for a punk rock band from Exeter.

Tickets are £8 advance and can be picked up from Esquires Bar, Boutique Planet &, Marios Hair Design