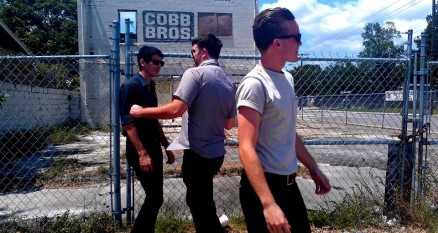 MERCHANDISE + Eagulls + Blisseyes
We have booked one of our favourite new bands for a show at Esquires in August, the critically acclaimed US band MERCHANDISE will be coming over to play a show for us as part of their UK tour. These guys are touted as one of the most exciting live prospects of the current crop of emerging guitar bands, if you’ve seen them or read one of the many glowing reviews, you will know that this show is unmissable! …  Merchandise is a band fighting against the easy categorization reserved for abbreviated biographies. The project is equal parts punk misanthropy, maudlin balladeering, fine art, low humor, classical study, psychedelic spacecasing, mad science and pop genius.
Formed as a trio in Tampa, Florida in 2008, the band has undergone ceaseless revision and reinvention. After putting out numerous records and tapes on independent punk labels and touring the underground, the band truly hit its stride with the release of their second LP “Children of Desire” in April 2012. If you buy generic Levitra from the online pharmacies on this page , you save much money.
In addition to a very warm reception from fans, the record received praise from the likes of Pitchfork, NME, Spin, and numerous other critics and journals.
2013 will see the band releasing a new 12″ on Iowa City’s excellent Night People label and touring extensively throughout America and Europe.
——————
Support on the night from hotly tipped Eagulls and Blisseyes
Tickets are £8 advance On sale now from: Luscious Juice Bar, 4 Lime St, Bedford Danny’s Bar, Esquires, Bedford
—————-
Doors open 7.30pm This is a 14+ show, under 16’s to be accompanied by an adult