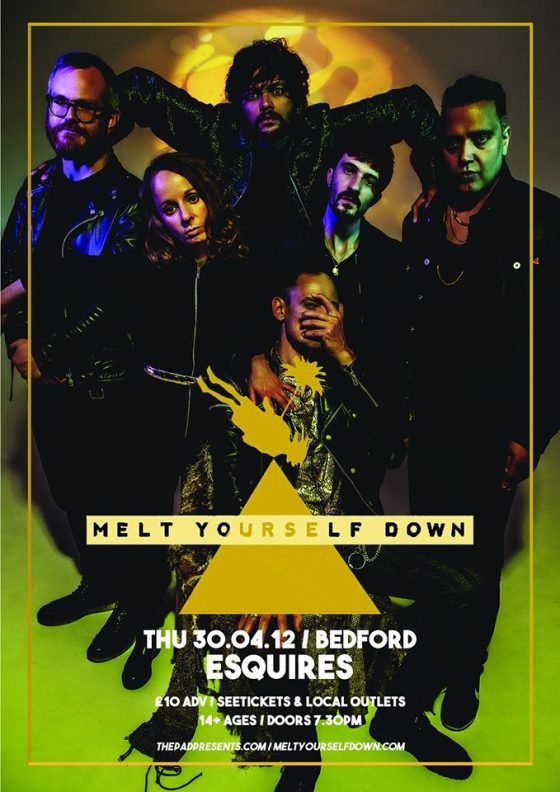 PLEASE NOTE THIS SHOW IS RESCHEDULED FROM THURSDAY 30TH APRIL AND WEDNESDAY 7TH OCTOBER 2020 and 4th MARCH 2021, ALL TICKETS FOR THIS SHOW REMAIN VALID

MELT YOURSELF DOWN + Guests

We are very pleased to announce that the amazing Melt Yourself Down will be gracing the Esquires main stage on Thursday 4th October! If you like bands like Sons Of Kemet, !!! and Comet Is Coming, this one is firmly for you.

Boot and Spleen makes a statement, both sonically and in its message. Inspired by the dark history of British colonialism in India, it asks the question: “What is it to be British? What’s that identity now, in 2019? What sort of behaviours are allowed towards minorities, or from minorities towards the majority?”

There’s no simple answer to those questions but Melt Yourself Down are set to ignite debate by asking them. Founded by sax innovator Pete Wareham and fronted by lead vocalist Kush Gaya, they play into a great tradition of British insurgents that spans decades and genres, from the Sex Pistols to Radiohead, and from Kate Tempest to Young Fathers. Yet the band’s lineage is also connected to jazz’s rich history of sticking a middle finger to The Man. “Jazz was the wild, dirty music of the 20s, 30s,” says Kush. “It was not a sit down, polite, experience.” Pete adds: “I love jazz best when it feels dangerous.”

This new music is the band’s strongest statement yet, representing both a peak of musical synthesis for the band as well as a personal triumph. Working with production legends Youth and Ben Hillier, the band have reimagined themselves and created a bruising re-up of their signature sound with added synths, anthems and epic joyrides.

“So much has changed in the world since we started writing in 2016” says Pete. “We couldn’t ignore any of it and this new music is borne from our feelings of cultural restlessness in this constantly shifting global climate”.

Melt Yourself Down have firmly cemented themselves at the forefront of today’s music innovators. The desire to create new sonic pathways is an integral philosophy to the band, whose two critically-lauded albums to date have alchemised influences from Noisy No Wave to Nubian Rhythms to create an eclectic, high energy and pan-global kind of punk rock.

Showcasing the prolific talents of saxophonist Pete Wareham, Melt Yourself Down rose from the ashes of his previous outfit Acoustic Ladyland and from everything he learned with Polar Bear. His work in reinventing and defying musical genres has paved the way for acts such as Comet is Coming, Black Flower and mercury prize nominated Sons of Kemet, to name a handful.

With their increasingly attuned sense to the world around them and each other, more people than ever will undoubtedly be embracing the new sound of Melt Yourself Down.