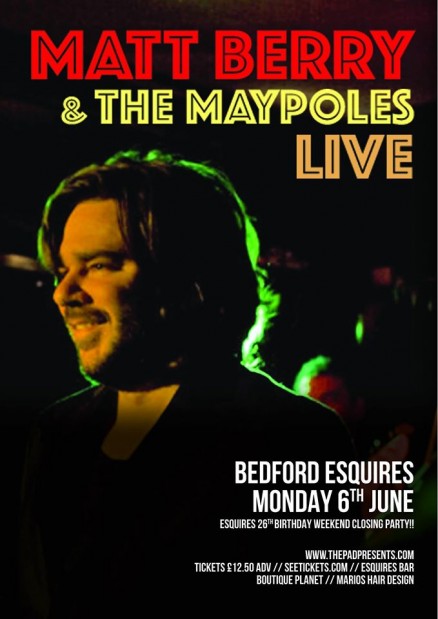 Matt Berry was always convinced that, should he be lucky enough to avoid getting a ‘normal’ job, he would be a musician. His life would follow a certain path which, whilst not obviously attractive to most, would have seen him be ‘in a number of bands that would get dropped by the record company.’. So far it hasn’t quite turned out like that at all. The arrival of his second album, ‘Kill The Wolf’ confirms this and, given the positive reaction to its predecessor, 2011’s ‘Witchazel’, it is unlikely his prediction will be coming true any time soon.‘Witchazel’ announced Berry as a writer of some distinction, MOJO praising an album ‘coming from a place of real eccentricity and imagination’, The Guardian finding the whole thing ‘genuinely impressive’,The Times declaring Matt a ‘multi-instrumental pysch-folk genius’ and Q summing it up neatly for the newcomers as ‘the sound of the Fleet Foxes had they grown up within earshot of the M25’.

Location is a prime drive of Matt’s musical world; it’s fair to say that ‘Witchazel’ and ‘Kill the Wolf’ could not really have come from anywhere other than England. His music and lyrics abound with particularly English references, shot through with the hazy bleached out colours of late 60’s / early 70’s psyche-rock whilst avoiding either tribute or pastiche. Take album opener, ‘Gather Up’, the first track to be written for ‘Kill The Wolf’, and, according to Matt, the track that ‘kind of kicked it off’, a circular chant that seemingly lists the contents of the average apothecary’s cupboard in the middle ages but also serves as a scene setter for what comes next, drawing us out of the modern world and into an arena of possible magick and less immediate forces.

‘Kill The Wolf’ takes its title from the old English folklore that demanded a ritual sacrifice of a wolf for the disappearance of a child or any similarly ‘evil’ happening within the community. The concept of transference of evil into a physical form sits at the centre of the songs on the album. As Matt would have it the album deals with ‘the devil and the saint inside us all, and how hard we try to let the best man win, whomever you may consider that to be.’ Alongside ruminations of good and evil, the natural world is ever present, most obviously on ‘Solstice’, a two part progression that represents the journey from the shortest day to the longest day in musical form and is unashamed in its deployment of guitar solos, clarinet, phased vocals and harpsichord over nine minutes that highlight the continued influence of Matt’s formative music love, Mike Oldfield. Discount generic Viagra online find at .

‘I remember looking at the back of ‘Tubular Bells and all the instruments and thinking, fuck, that’s what I need to do, I can actually do all this myself’, Matt recalls. He is aware that going public on Oldfield is not the cool option but, unlike most musicians, he simply doesn’t care:

‘I don’t keep an eye on trends, I do what I want to do anyway, whether fashionable or not.’

Which would explain how the same album could contain the Bacharach-like beauty of ‘Knock Knock’ and make the pair sit together.

In many other ways though, Matt Berry conforms to our preconceptions of the musician. He fervently believes ‘that a guitar that day will have a song in it or two’ and his collection of analogue synths in his home studio points to the obsessive stereotype of the songwriter / producer. Having

been inspired by Oldfield, Berry has realised that childhood dream, playing almost everything on both albums with only drums (not an obvious home recording option), sax and clarinet outside his musical scope.

Then again there aren’t many musicians who both play nearly everything on their albums but, conversely, welcome a host of guests including Eric Johnson of The Shins, Mark Morris of The Bluetones and James Robert Shaw of Everything Everything onto their new album. Further, there are few producers who encourage collaboration in order to gain something previously unheard from the hired hands. In the case of James Robert Shaw this approach was particularly rewarding for Matt, adding slide guitar to ??? following a meeting based on mutual musical admiration:

‘I was keen for James to do something he wouldn’t normally do. He is a great technician so I knew he’d get off on this challenge. Slide seemed obvious because it’s a style of playing you’d be unlikely to hear on an Everything Everything album. His solo is beautiful’.

So, with the album done, will Matt be thinking about the next one to keep on avoiding that self-proclaimed short career strategy of his teenage self?

Thankfully, for those of us already in thrall to ‘Kill The Wolf’, Matt will maintain a musical focus for some of 2013. There are May tour dates with Mark Morris joining a six piece band to recreate the album as ‘faithfully as possible’ despite Matt noting that putting together such a live outfit is, ‘a pain in the arse but you want to get it to sound right’. Fittingly this student of the English pastoral also makes his first festival debut at the Green Man Festival over the summer. In between these excursions into the world of touring there are writing and acting assignments and more from his Radio 4 show ‘I Regress’ which won the prestigious Screen Writer’s Guild award for its first season.

But until those dates, Matt Berry the musician is on hold whilst other things take precedence. As for the next album, that is currently not even on the drawing board. But it will be, one night at 4am, that call will come from the guitar to say its next song is ready and the process will begin again.

Support comes from the wonderful Big Nothing, a band we’ve had on a few times before and can’t wait to see again – Go give them some love.

Tickets are £13.50 advance, on sale now from:
http://www.seetickets.com/event/matt-berry-the-maypoles/bedford-esquires/979280