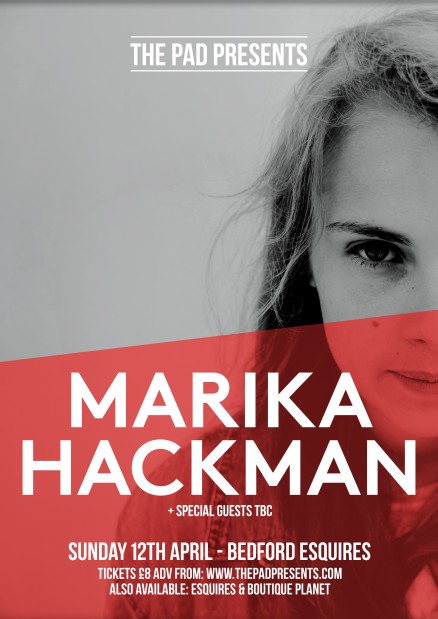 THE PAD PRESENTSwww.thepadpresents.comMARIKA HACKMANWe’re very pleased to announce one of the most exciting female singer songwriters to come from the UK in a long time will be coming to Bedford Esquires on Sunday 12th April. Marika Hackman was the 3rd most blogged about UK artist last year and is set to release her debut album in February, just before making her debut in Bedford as part of her UK tour.“Redefining folk” – Dazed & Confused“The lovechild of Nico and Joanna Newsom” – NYLON

Marika Hackman’s new single ‘Animal Fear’ will be released through Dirty Hit on 16th February 2015, the same day as her debut album, We Slept At Last.

From the tangled folk roots of That Iron Taste through to the swarming psychedelia of Sugar Blind and Deaf Heat, there’s a distinct sense of adventure to Marika’s songwriting. Over this trilogy of hugely revered EPs her extraordinary songs have continued to develop and evolve, whilst still retaining the same beauty and invention that make her vision truly unique.

It comes as a surprise to learn that not one of the 13 original songs on those three EPs has made it onto Marika’s debut album, We Slept At Last, a decision that speaks of cussed self-confidence and a desire to keep moving and evade glib definition.

We Slept At Last is an assured and endlessly intriguing debut album that rewards every repeated listen with new riches. Produced by long-term collaborator Charlie Andrew (Alt-J), each song uncovers an artist undaunted to challenge traditional conventions to create something that’s at once classic and contemporary.

The physical editions of Marika Hackman’s debut album will be released with an art booklet (24-page vinyl / 28-page CD) containing a series of poetic and powerful images by Californian-born photographer Glen Erler, that are inspired by and resonate with the same dark narrative as We Slept At Last. Celebrating the album release, Marika will be exhibiting the full collection of photos in Camden’s Cob Gallery on 18th February and performing the record in full with her band.

Tickets are £8 adv, on sale from Friday 23rd January – 9am fromSeetickets.com: http://www.seetickets.com/event/marika-hackman/bedford-esquires/846988

Also on sale from Boutique Planet Clothing, The Arcade, Bedford and Bedford Esquires