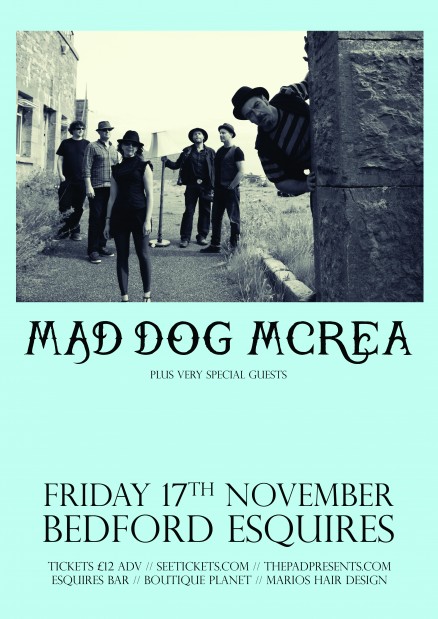 Mad Dog Mcrea blend a unique mixture of folk rock, pop, gypsy jazz, bluegrass and ‘shake your ass’ music. From self-penned songs of adventure, drinking, love and life, to traditional songs of gypsies, fairies, legless pirates and black flies – Mad Dog never fail to capture their audience with their infectious songs. It was at Glastonbury in 2013 (notably the Avalon Stage), the release of their ‘Happy Bus’ video, take-up from national radio from esteemed folk such as Mike Harding, and others………. Matched with the unshakable dedication of their massive and loyal to the hilt, fan base – that Mad Dog Mcrea began to become more than just a very popular, West Country festival act; – whilst obviously killing it live – Mad Dog Mcrea, determined that their fans and media alike – should see them as serious and acclaimed recording artists too. Mad Dog’s new album ALMOST HOME, produced by Sean Lakeman, is an album fuelled with the all the essential Mad Dog energy and antics that the band have become known for – Dave Podmore writes engagingly about Mad Dog stuff – as one might expect, all night drives, police car chases – Folk musicians, in particular have been playing tribute to the hero’s of WW1 of late – MDM are no exception, offering up their bone chilling song – “You Can’t Find Me”. “The Sound” written by Seth Lakeman includes beautiful guest vocals from Suzie Mac. In constant demand and having played just about every festival and two-bit, jibe-arsed dive in Christendom, Mad Dog Mcrea. are, in every sense of the word, a live, band – ALMOST HOME – encapsulates that – and so much more. The famous purple happy bus is fired up and ready for action, and there’s room for you – jump aboard! Special guests tbc Tickets on sale now priced £12 advance available from Seetickets now and from the regular outlets of Esquires Bar, Planet Boutique & Mario’s Hair Design from the 20th May.     “It’s always a joy to me when something jumps up and smacks you between the eyes – Mad Dog Mcrea did that to me” – Mike Harding   “A sound mixed, mashed and finely honed through years of live gigs” – Rock ‘n Reel Magazine   “This is rowdy, heartfelt, room shaking and spirit-stirring music that only the dead can’t enjoy.” – ltdstate.com   “Musical magicians Mad Dog Mcrea are synonymous not only with a damn good party but also quality musicianship and the odd surprise” – Talk Torbay   “This is music that transcende the run-of-the-mill Irish Wannabes and leaves them standing.” – Acoustic Magazine   “An anarchic mix of styles, fantastic!” – Genevieve Tudor (BBC Radio Shropshire) “The standout part of this album is the superb balance between vocals and instruments. Every track is perfectly clear and with such a diversity of instruments it is a huge tribute to Lakeman that every word is crystal. It is also a tribute to the distinctive voice of guitarist Michael Mathieson.” – 5* – Irish Post   “Mad Dog Mcrea perfectly fuse traditional folk songs with a grittier folk rock sound, tinged with notes of Jazz and Bluegrass. Almost Home reaches new depths – from within their ‘self penned songs of adventure, drinking, love and life to traditional tales of gypsies, fairies and pirates’.” – Fatea Records