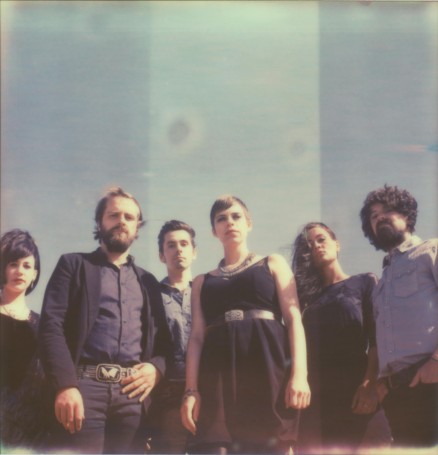 We are very pleased to announce that we’ve secured a dates with one of the most highly rated new bands coming out of London, out on tour in October to promote their debut album release on October 27th. The hype on Lola Colt is huge at the moment, with mass press and many predicting big things for the band in the next 12 months – Make sure you don’t miss a chance to see them at a venue on your doorstep.

Taking their name from a 60’s spaghetti western, Lola Colt are a powerful and imposing six-piece with 3 girls and 3 guys, fronted by captivating Danish vocalist Gun. The band have sent their audiences into a frenzy with their more than memorable live performances, including a sold out show at London’s Electrowerkz to celebrate the release of their debut single and an intoxicating set at this year’s International Psych Festival in Liverpool.

Lola Colt originated as the song writing partnership of Gun and lead guitarist Matt, who came together through a long-standing love of vintage films and cinematic sound, as well as having freakishly similar record collections. Film scores have featured heavily in both their lives and continue to be a big influence in their music today. When Matt first started writing music, it was in the form of film scores and theatre productions. As the band developed into a six-piece, their earliest ideas were to create a soundtrack to a film that hadn’t been written yet.

When writing or performing they let a feeling or mood lead the music whilst still paying particular attention to detail; nothing is superfluous. “We’re fellow travellers on the journey, helping to guide the way, but not dictating the path”. People talk about their music and live experience in terms of what they felt or where the music took them – a desert highway, an open road or a seedy inner city alleyway.

Breaking out from their psychedelic underground beginnings, they are an impressive proposition live and they make certain every show feels like a special event. Visuals are a trademark feature of their live shows, where cinematic projections compliment a collection of unusual visual instruments used on stage. A VJ acts as a seventh member of the band with scripted sets performed in real time. The band have also picked up some unusual Asian instruments on their travels and vintage equipment which they “twist and torture with modern day effects and techniques to give them a unique sound”.

The band are currently in the studio recording their debut album with Jim Sclavunos, due to be released Autumn 2014.

Special guests for the evening are PEARL HANDLED REVOLVER

Tickets are on sale now from Seetickets, Luscious Juice Bar and Esquires

AFTERSHOW PARTY – HALLOWEEN NIGHTMARE BACK AT THE PAD NIGHTCLUB