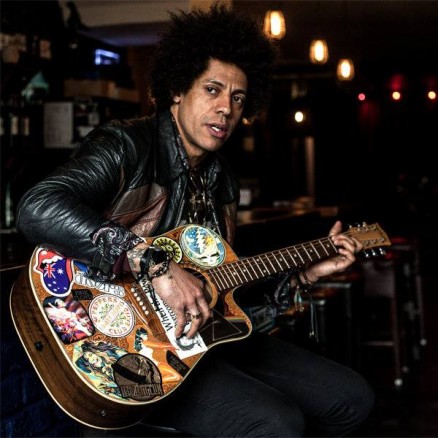 Lewis Floyd Henry – The greatest one man band on the planet!

“I’m blowin’ up like you thought I would Call the crib, same number, same hood It’s all good (It’s all good) And if you don’t know, now you know” The End…

Lewis Floyd Henry has been out on the streets and stages of the world evolving as a one man band and gaining the reputation of being a great live act. Whilst developing his unique approach to performing, musical ideas have flourished in the form of his own compositions and recordings.

Lewis Floyd Henry takes the rarified tradition of the one man band, street corner, blues music of Lone Cat Fuller to an almost burlesque stratospheric level –a one man, multi genre, sonic medicine show. Lewis devised a foot operated miniature toy drum kit set on it’s side for his “rhythm section” with other pedals including loopers you can imagine the reanimated ghost cadavers of Son House, Jimi Hendrix and several bright orange dwarves dancing like voodoo puppets as he pounds out rhythms like an ancient, corroded 808 against a back drop of 60’s psyche inspired grooves.

He sounds like Lone Cat Fuller jamming Captain Beefheart in Margate. What makes it so great is the loose one man band synthesis of Piedmont Country Blues, the occasional vocal flavours of Mick Jagger and the vintage ragtime jazz and skiffle leanings. You can even taste a bit of Hendrix, Son House and a slice of Hank III and Beck just to spice everything up a touch.

Tickets are £8 adv, on sale now from Seetickets: