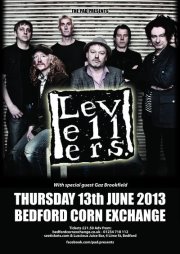 We are pleased to announce that Levellers will be returning to Bedford Corn Exchange after selling out the venue a full 6 weeks in advance last time they played here back in February 2011.

Sell-out tours, 25 years in the ‘business’ and ten years of their own sell-out festival, Beautiful Days, are powerful proof of the power of the underground and the power of great live music. Renowned for their energetic live show, longevity has not diminished the Levellers’ ability to put in a performance and get everyone in a room, or field, dancing.

Heralded as their most accomplished album to date, the band released new studio album Static On The Airwaves in 2012. Produced by Sean Lakeman, who is renowned for producing his brother’s Mercury-nominated and gold-selling albums as well as Letters From The Underground (Levellers’ previous album), Static On The Airwaves was recorded ‘as live’ at Sono Studios in Prague.

Brighton folk-rockers Levellers have long been and still are, one of the best live bands around. But, often overlooked is their impressive back catalogue of recorded music. The Levellers sold more platinum, gold, and silver albums in the 1990s than any other act. 5 of their 6 Top 40 albums (which spawned 14 Top 40 singles), including the number 1 Zeitgeist, were recently re-released.

Their platinum-selling 1991 album Levelling The Land is widely regarded as an absolute classic and the band celebrated the 20th anniversary of the release of the album, which features hits including One Way, Riverflow, The Game, Far From Home and Liberty Song, in 2011.

Tickets are £21.50 advance and we strongly advise buying them in advance as last time they sold out over a month in advance.