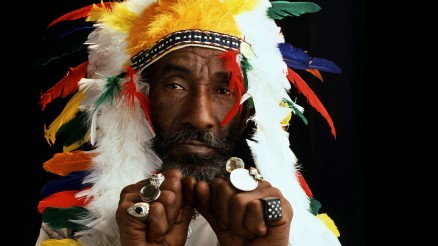 LEE SCRATCH PERRY & Guests Zedo & the Method – Friday 11th October at Bedford Corn Exchange …
We are pleased to announce that we have secured a date with a true pioneer and legend of music, Mr LEE SCRATCH PERRY and his band will be joining us here for a date later on this year.
Lee ‘Scratch’ Perry seminal Jamaican reggae producer noted for his innovative studio techniques and production values. Perry was one of the pioneers in the development of dub music with his early adoption of effects and remixing to create new instrumental or vocal versions of existing reggae tracks. Perry has worked with Bob Marley & the Wailers, Junior Murvin, The Congos and Max Romeo.
A long and distinguished career has seen him nominated as one of Rolling Stone’s top 100 influential musicians of all time, winning Grammys and still touring the world with his live band, constantly playing to sell out audiences of adoring, dancing fans.
All we know is that we went to see him just a few months ago and came out grinning from ear to ear, so we’ve booked him so you can do the same.
Support on the night come from Zedo & the Method.
————-
Tickets are £21.50 advance
On sale 12pm Wednesday 5th June from Seetickets.com (link to follow)
On sale at the following from Monday 10th June 9am www.bedfordcornexchange.co.uk Central box office – 01234 718112 Luscious Juice Bar, Bedford Vinyl Revelations, Luton Davids Music, Letchworth Rushden Music, Rushden
————-
Doors open 8pm
This is a 14+ event – All under 16s will have to be seated on the balcony and accompanied by an adult
FREE AFTERSHOW PARTY – Details to follow shortly