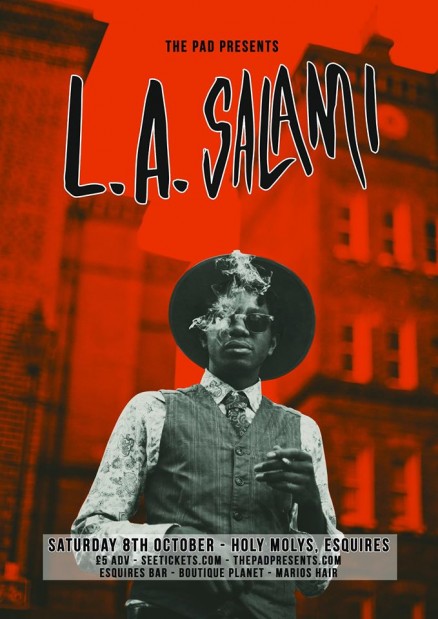 EHMEHGERD! Excited to say the least that L.A. Salami, who dropped our fave tune of the summer ‘The City Nowadays’ is coming to Esquires for an intimate warm up show before his Pad Presents stage performance at Levels Festival in Luton the next day.

Listen to this. NOW.
https://www.youtube.com/watch?v=lBEZ7jiEhMc

Tickets are available £5 advance online only from Seetickets
…
Full support line up to be announced.

L.A. Salami isn’t kidding when he tells you he has a backlog of songs.

“I had all these albums already written in my head,” begins the London-born singer/songwriter/poet, “and I wanted to make an EP that took a track from each of those albums – that’s why The Prelude EP has nine tracks,” he says of the 2014 release, the follow up to his 2013 debut, the Another Shade Of Blue EP. So, to be clear: Salami has nine albums already written.

Nor is he over-egging the pudding when he reveals his original plans for his first (to be released) album, the energetic, rousing poetical, polemical, “postmodern blues” and urban folk tour de force that is Dancing With Bad Grammar.

“One track, ‘Nazis On The Northern Line’, was going to be on this album, which I wanted to have 24 tracks,” he admits, which was probably a bit too ambitious even for a label as forward-thinking as Sunday Best. The boutique outfit, the home of Rob Da Bank and David Lynch, signed Salami in 2015, two years after he drew the attention of fashion designer Christopher Bailey and was booked to perform on the Burberry Acoustic platform for new artists.

“But when I realised it couldn’t be that long,” he continues, “I moved ‘Nazis…’ back to Back To The City, which is actually my favourite album. Then there’s an album called The Bootmakers which is more rock’n’roll stuff…” To, again, be clear: this biography is about Dancing With Bad Grammar. And to re-reiterate: it will be the first L.A. Salami album to be released.

Nor is he engaging in false modesty when he tells us he’s new to all this – he only started playing guitar a few years ago, having received an acoustic as a present on his 21st birthday. He also plays harmonica, a choice inspired by Bob Dylan, “and a bit of piano”. That’s not to say he’s not been a writer for some time.

“I wrote my first script when I was seven – I still plan to film it,” admits this all-round cultural sponge obsessed with cinema from an early age, “then from there I got into writing poetry, then I wrote music in my head. I just loved rock stars and the romantic idea of expressing yourself that way. But no one got me an instrument because no one could afford it,” he says, a passing reference to a challenging childhood spent shuttling between a foster family in Kent and his single-parent mother in London. “But then when my friend gave me that guitar, I just started learning how to play it by writing songs.”

And nor, finally, is L.A. Salami having us on when he insists the name’s no stage moniker. Of Nigerian descent, his full, real name is Lookman Adekunle Salami.

Something else to clarify: don’t be wrongfooted by all this talk of ambition and precocity. L.A. Salami is no showboating show-off. Rather, he’s mild-mannered and effortlessly stylish, with the warm charisma and honeyed voice of an impassioned original.

In the tradition of the fuss-free, no-hassle, DIY troubadour, he recorded Dancing With Bad Grammar in one week (“I wanted to get it live; I’m not interested in the tracking thing”) at Urchin Studios in Hackney, London, with engineer Dan Cox and producer Matt Ingram. He liked the sound of Laura Marling’s last lbum (2015’s Short Movie), also recorded at Urchin, and he liked the sound of Cox and Ingram, to whom he was introduced by Lianne La Havas, an old friend whom he’s supported on tour.

In all the right ways Salami is as conversationally introvert as he is musically extrovert. A gentle soul with a sharp observational eye, he prefers to pack his teeming thoughts and fears and opinions and observations into his brilliantly wrought lyrics and boldly titled songs.

Take opening track ‘Going Mad As The Street Bins’. A Beck-meets-Kate Tempest jam (complete with rootling Sixties organ and crashing riffs), Salami uses his soulful croon to suggest that, “Jesus is a nifty type of mother…”

“You know when you see a packed bin, stuff hanging out of it, because people have just casually chucked stuff in there? I think people in the modern city feel that. You’re just bombarded with stuff, there’s rubbish in your head, and it can just drive you crazy, especially in London.”

All that said, this deep-thinking artist finds the teeming lives, sights and noises of city inspiring. To Salami, there’s art in that trash.

“I’ve always liked urban environments in general, in terms of poetry as well. It’s a perfectly natural setting – if it wasn’t, it wouldn’t have evolved – so it’s important to engage with it. It is depressing at times, but that’s life. I’m completely urbanised; I can’t imagine living outside the city for too long. I need to feel the lights and the sounds and the anger!” he smiles. “And it’s full of joy as well.”

As much is apparent on ‘The City Nowadays’, the first single from Dancing With Bad Grammar. It’s an energetic tumble of ideas and influences, mixing beat poetry, chain-gang blues, hip hop and pithy one-liners, with L.A. riffing on a range of modern stresses and signifiers, from terrorist paranoia to high-cholesterol, from Jeremy Corbyn to the death of cinema at the hands of over-enthusiastic, under-discerning critics.

“It’s true!” he exclaims (quietly). “You see a film advertised on the side of buses and you know it’s shit even though it’s got four stars. It’s being sold to us, and it’s kinda insulting – it dilutes and ruins art… he says, sounding like a ponce…”

But refreshingly, L.A. doesn’t sound weary or cynical when he sings, raps or recites these thoughts.

“Well, depends on what mood I’m in,” he concedes with a smile. “But ultimately I’m an optimist. I’m a realist as well, but I’m an optimist in life and love. I’m sure people in the Fifties thought the Twenties and Thirties were the good old days. When Lou Reed was in The Velvet Underground he thought The Beatles were trash. It’s all about your perspective.

“I call my music postmodern blues. I’ve always loved the blues, and I think of this album as my version of blues songs. ‘The City Nowadays’ is like that. Hip hop is modern blues; it came out of the same sort of stresses and social dynamics of African-Americans feeling oppressed, and expression coming out of that. Then it’s caught by the rest of society and transformed into a different kind of thing.”

So there’s defiance and exuberance, too, most pointedly on ‘I Wear This Because Life Is War’, a galloping song with a fierce energy and momentum, not to mention an eye-popping vocal. “It’s just a simple blues song, born of the idea of wanting to shout over an audience in an open mic night that isn’t listening to you – which is life, isn’t it?” he laughs.

Equally, even on the closing song, an eight-minute meditation titled ‘My Thoughts, They Too Will Tire’, Salami sounds hopeful, not defeated. Gently played but deftly painted, it’s a kaleidoscope of images and characters that Salami would, typically, rather not unpick too much. Much better for listeners to jump in and enjoy the trip on their terms.

“I wanted to write a song that was about everything, really just tying everything together. It took a while to gather my thoughts, but then it just spewed out. The words came first, then a rough melody, then the guitar part a month later. I didn’t overthink it.”

Elsewhere, Salami’s love of and appreciation for key corners of Sixties and Seventies music shine through. ‘Day To Day’, on which he plays harmonica like he was born to it, is the most Dylan-esque. Then, ‘Why Don’t You Help Me’ and ‘I Can’t Slow Her Down’ are beautiful folk songs in the Nick Drake tradition (“I love him; his story used to break my heart”), this brand new guitarist playing with astonishing skill.

They’re cornerstone examples of something else Salami does with uncommon ease: write songs that are complex but not convoluted. He nods at this assessment.

“When I was first starting to play I had a philosophy: the more simple the music, the more engaging it is. I still have that a bit. If the songs are music-heavy, but you want it to revolve around the lyrics, something gets lost. You can’t engage with the words so well. Personally, I think you go by your strengths, and words are my strength, so they take first place. They have to sit on top of everything, or be the lead. If that’s where the power comes from, don’t be ashamed of that.”

It all adds up to an album brimming with ideas and melodicism, poetry and punch, nods to where we’ve come from but passion for where we’re going. It’s the sound of a young man abroad in the city, hopping the Tube, dodging street bins, shouting in pubs and soaking up the stuff of the streets, from gutters to rooftops and back again.

“I want to portray modern life using the past as a vehicle,” concludes this blazing new talent. “I love Sixties and Seventies music, that’s where my heart is. But I don’t want it to sound of the past, I want it to speak of now. Any great art does that – acknowledges the past but lives only in the present. If I can do that,” says affable L.A. Salami with another easy smile, “it’s a job well done.”