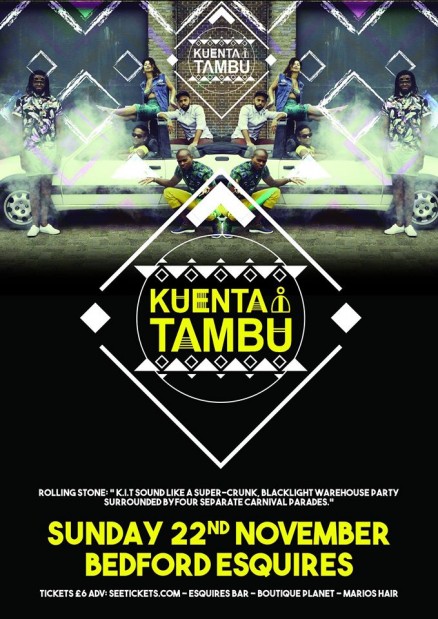 Kuenta i Tambu +
Easydread + D-Dots
Bedford Esquires
Sunday 22nd November, doors 7.30pm
Never afraid to bring something new to our programme of live music the Pad Presents have lined up a special treat to liven up a November Sunday evening from a band we stumbled upon earlier this year at the Great Escape Festival in Brighton and were vblown away by the liverperformance.Inspired by traditional Afro Caribbean music from Curacao and European dance, Kuenta i Tambu (also known as KiT) has created a brand new sound!
They cleverly found a balance between electronic sound samples, singing and chanting and the infectious rhythms played by ritual tambu drums.
Some call it Global Bass, others prefer labeling it Tambutronic but one thing is for …sure: it’s a wild and colorful explosion of energy, and always seems to set off some serious movements on the dancefloor!Kuenta i Tambu translates to ‘Stories and Drums’ from Papiamentu, which is the language spoken on the islands of Curacao, Aruba and Bonaire (Dutch Antilles). The group is based in Amsterdam and was formed in 2005 after a series of educational projects at schools and theaters to introduce the music and culture of Curacao to children in the Netherlands.
During this period the first songs were written, establishing the sound and identity of the group which nowadays is known for its high energy shows, with a great deal of humoristic highlights, hypnotizing beats and dazzling percussive interplay between band members.Live, Kuenta i Tambu are a non-stop Carnival, a riot of beats and rhythms that take the audience deep into the Caribbean. Above all, though, it’s obvious that the musicians enjoy playing the music and the live percussion thunders through the air. “We have fun,” says Calister, “and that’s the key.” Tambutronic: where Curaçao’s past dances with its future and takes on the world.Special guest support to be added in the coming weeks.

Tickets are sale priced just £6 from Seetickets.com and will be available from our regular ticket outlets Esquires Bar, Planet Boutique in The Arcade & Marios Hair design from Thursday 22nd October