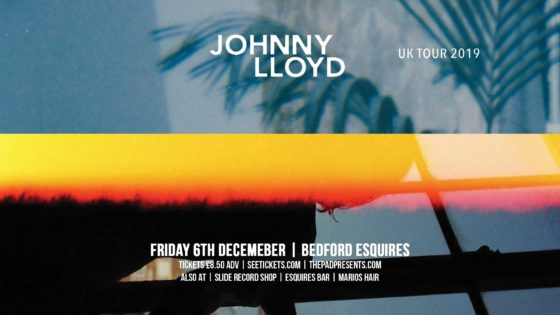 Johnny Lloyd has come a long way since 2014 when, after two top 40 albums, world tours and support slots with Pixies and The Rolling Stones, Johnny disbanded the critically and commercially beloved Tribes and struck out on his own.

Taking the hazy pop sound he’d spearheaded with is bandmates, Johnny spent little time taking it into darker, rougher territory. He founded a new musical home and friendships with Jamie T, Mike Crossey (Producer of The 1975, Hozier) and Hugo White (The Maccabees), who helped guide the recording of his first two solo EPs – ‘Dreamland’ and ‘Eden’.

The past year or so has seen Johnny extend his songwriting abilities from his own songs to producing music for television and film with over 1,000 uses of Johnny’s music on TV in 2017 alone as well as writing the score for his first full-length feature film, Rare Beasts, in 2018.

However the time came for Johnny to pen more personal songs and set about writing his debut album. Recorded in North London with producer Nathan Coen, the album is raw and personal. For the finishing touches Johnny called in talented mates Frank Turner, Hugo White (The Maccabees) and Adam Prendergast of Harry Styles’s band.

With the album set for release in early May 2019, and tours being booked for the UK, Europe and further afield, Johnny Lloyd is back with a renewed sense of direction, a sure and steadfast attitude that is echoed throughout the album.