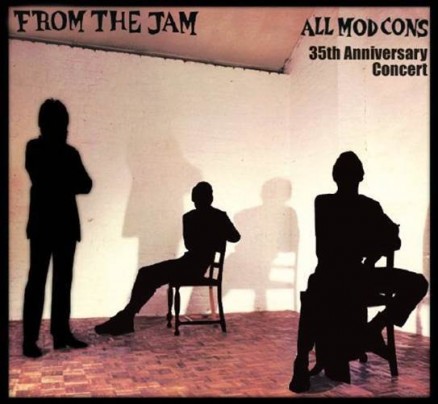 FROM THE JAM ‘ALL MOD CONS’ 35th Anniversary Tour – revisited

2013 saw the 35th Anniversary of the release of ‘All Mod Cons’ the third album release by The Jam.

No strangers to Bedford Corn Exchange FROM THE JAM ft Bruce Foxton return for the annual Pad Presents St Georges Day gig at the venue and this time round the band will be performing the All Mod Cons album in its entirety, including one of their most commercially successful singles, ‘Down In The Tube Station At Midnight’.British Invasion Pop influences run throughout the album, including the bands’ take on The Kinks’ ‘David Watts’.  Running in at just under 40 minutes this show will see the band perform the iconic album track by track performing tracks not usually performed by the band such as English Rose, Billy Hunt and ‘A’ Bomb In Wardour Street.

From The Jam will also be performing a selection of the classic hits and great album tracks from across their fantastic catalogue produced by one of Britain’s’ seminal bands. The Jam had amazing chart success with 18 singles and 7 albums to make the top 40 in the United Kingdom from their debut in 1977 to their break up in 1982. Their last 5 albums were all top ten hits and their last 8 singles made it into the top 10.

Classic singles include:  In the City · All Around the World · The Modern World · News of the World,· Strange Town, When You’re Young, The Eton Rifles, Going Underground · Dreams of Children, Start!, That’s Entertainment, Funeral Pyre, Absolute Beginners, Town Called Malice, Precious · Just Who Is the 5 O’clock Hero?, The Bitterest Pill (I Ever Had to Swallow), Beat Surrender

The album legacy includes: In the City · This Is the Modern World ·All Mod Cons · Setting Sons · Sound Affects · The Gift

Guest support comes from the Ska Masters and room 2 will feature classic and Northern Soul as previous years with Hammy & Geoff until 1am.

Tickets are now on sale priced £20 via see-tickets, further ticket outlets will be added in the coming weeks.

Here’s this months interview with Bruce Foxton on Mojo’s website: