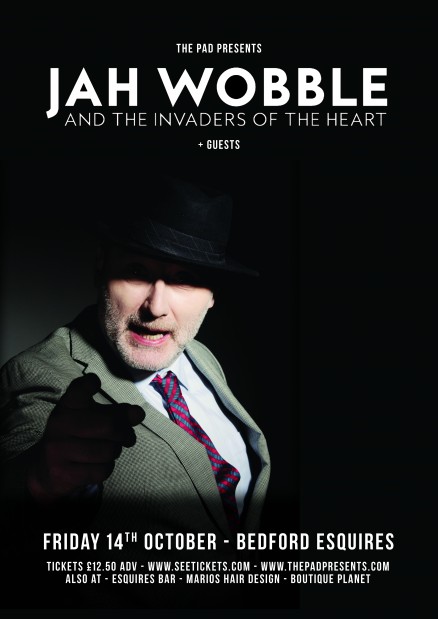 Jah Wobble & the Invaders Of The Heart + The SG’s

The Pad Presents…
JAH WOBBLE & THE INVADERS OF THE HEART + GUESTS

The one and only! Jah Wobble began his musical career at 18 as a founder member of Public Image Limited. His heavy, hypnotic bass lines defined the post punk era and have influenced many musicians over the last 30 odd years.

John Wardle originally met John Lydon, John Grey and Sid Vicious at Kingsway College, London, in 1973. It was Vicious who originally nicknamed John “Jah Wobble” after a drunken binge, and would also loan him his first bass guitar.

During the heyday of punk rock in the mid to late 70s, Wardle earned himself the reputation of being something of a wildman. His original introduction to the bass stemmed from his long-term obsession with dub reggae music. Combined with the D.I.Y. punk ethos, Wardle embraced punk and reggae, and in the process, created an original rock/reggae hybrid of his own.

After discovering his fascination with the bass guitar, Lydon asked Wardle to join Public Image Limited (aka PiL) during the spring of 1978. Wardle’s distinctive ‘low end’ bass immediately put PiL on the map and became the backbone of the band. ” The band’s debut album Public Image Limited included the band’s eponymous first Top 10 hit single.

After two magnificent albums, including the mighty Metal Box , Wardle became increasingly disillusioned by the music scene and the politics of the band and their reluctance to play live, and eventually split from the band in mid-1980.

After PiL, and before the genre became in vogue, Wardle became a well respected session and solo artist, with a genuine passion for Eastern and Global music. Over the past 37 years he has worked with a diverse range of musicians and music genres, way too many to mention here.

In 1986, after a long battle with alcohol, Wardle unexpectedly walked away from the music scene to work for London Underground. By 1987 due to the repeated prompting of his friend and former band mate, percussionist Neville Murray, Wobble reformed The Invaders of the Heart. Armed with a live recording of a concert he had made with a new line up of musicians during a European tour in 1988, Wobble travelled to New York City’s New Music Seminar in 1989 to get back into the music industry. Wobble was able to secure an eleventh-hour record deal with a small European record label. The live album, Without Judgement, recorded in the Netherlands was released in November 1989 and successfully revived Wobble’s career.

He went on to record, for East-West Records, the Mercury nominated Rising Above Bedlam which was released in 1991. By 1994 Wobble was back at Island Records, where he enjoyed commercial and artistic success in the early eighties. The result was the ground breaking Take Me To God album, that featured luminaries such as Baaba Maal, Chaka Demus and Pliers, Jaki Leiberzeit from Can et al. Close on the heels of recording Heaven and Earth with longtime friend and collaborator Bill Laswell in New York, along with Pharoah Sanders, Wardle produced and played on an album with Brian Eno called Spinner. It was around that time that Wardle fled major record company constraints and returned to a more experimental jand non-commercial sounding records. In 1997 he started up his own independent record label, ’30 Hertz Records’, and released a long series of critically acclaimed records, such as The Inspiration of William Blake and The Celtic Poets with Ronnie Drew of Dubliners fame.

Having overcome his alcohol problem in the mid-eighties, Wardle is now a reformed character. His wild man days are now long behind him, and he is now a dedicated family man with a documented interest in spirituality, and in 2000 received a B.A in Music and Philosophy. Until 2009 he wrote regular book reviews for the Independent on Sunday. Since then he has written book reviews for The Times newspaper. In 2008, accompanied by his wife Zi Lan Liao, he toured with a large group of Chinese performers (‘mask changers’ and dancers as well as musicians). He also released an album that documented that project called ‘Chinese Dub’ which won the Songlines magazine world Music award. Also in 2008, he made a very well received radio documentary about his old friend Sid Vicious for BBC Radio 3. In 2009, Serpents Tail published his acclaimed autobiography ‘Memoirs of a Geezer’. Since that time Wardle has made a ‘Japanese Dub’ album and a ‘Jah Wobble and the Modern Jazz Ensemble album. He has toured extensively with both projects. In 2011 he performed Glastonbury.

In 2011, Wobble collaborated with Julie Campbell, alias Warp Records artist LoneLady in a project called Psychic Life. The eponymous debut album Psychic Life was inspired by disco, post-punk and psychogeography, and released by Cherry Red Records on 14 November 2011. The album was well received and the single ‘Tightrope’ and its accompanying video prompted a warm response from critics and punters alike.

In early 2012 Jah Wobble briefly reunited with his old Pil sparring partner Keith Levine to perform ‘Metal Box In Dub’ . They played various european venues as well as Fuji Rock festival in July 2012. This was followed by the release of a four-song, eponymous EP. An album entitled Yin & Yang was released in November 2012.

Wobble has also collaborated with the British ambient group Marconi Union, the results of which were released as an album called Anomic on 30 Hertz records in June 2013. In October 2013, 30 Hertz Records released ‘Odds & Sods & Epilogues’ an illustrated book/CD of Jah Wobble’s poetry.

In May 2015 Jah Wobble & The Invaders Of The Heart embarked on an extensive six month UK tour.

In 2016 Jah Wobble intends to release a new Invaders of the Heart album via a PledgeMusic campaign.
Tickets are sale priced £12.50 in advance from Seetickets online and in person from Esquires Bar, Planet Boutique Bedford and Marios Hair Design Kempston