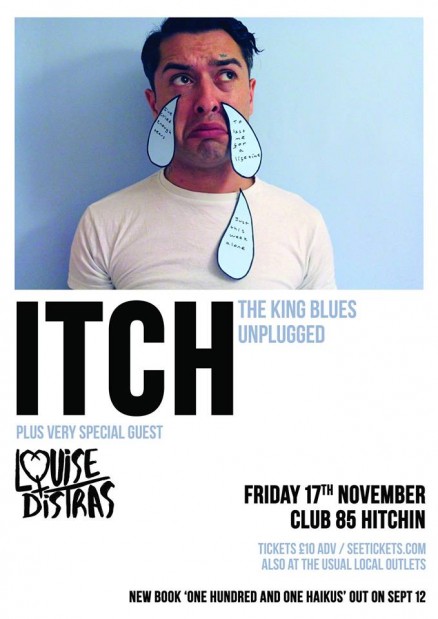 We have a very special solo show with Itch from The King Blues on Friday 17th November, and very special guest Louise Distras in tow too!

As frontman and songwriter for the critically acclaimed The King Blues for the past 13 years, Itch has made a name for himself as one of Britain’s most treasured lyricists and political spoken word artists. Through endless international tours, 5 albums plus a solo album and featured poetry performances, Itch has gained a sizeable fan base around the world. His poems have been commissioned by the BBC, ITV and Channel 4, he’s appeared regularly on the front covers of Kerrang, Rock Sound and the NME and his solo work which featured collaborations with Matisyahu, Goldfinger, Taking Back Sunday and Less Than Jake reached platinum sales status. For the first time ever Itch has turned his hand to the rigidly ruled world of haiku. In this adorable book with artwork by the man himself, Itch has created something that will make you laugh, cry and contemplate from one minute to the next. Itch wrote this blurb himself and is currently talking in the third person.

“Itch taught me everything I know” Lord Byron “

After reading this book, I take back everything I’ve ever said” Katie Hopkins “

Itch is the real MVP” The Dalai Lama

Expect this gig to be the best of The King Blues, with splatters of Itch’s solo work and spoken word.