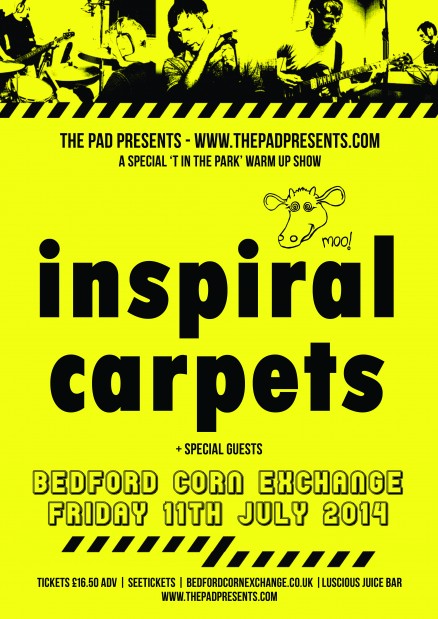 INSPIRAL CARPETS + Special Guests – 1 off T in The Park warm up date!

On Friday 11th July the ‘Pad Presents’ team have lined true up Manchester Royalty as Insprial Carpets make their debut in Bedford.

Alongside The Happy Mondays, The Smiths, New Order and The Stone Roses the Insprial Carpets are integral part of the Manchester music scene which saw the band rise to fame during the huge ‘Madchester’ indie dance phenomenon of the early 90’s. The band scored numerous top 20 singles including This Is How It Feels, Joe, Saturn 5, Move, Dragging Me Down, Caravan, She comes in the fall and the classic ‘I want you’ which featured legendary Fall frontman Mark E Smith’s only ever TOTP appearance.

As well as hit singles the band also cracked the top 10 with their 4 albums Life, Revenge of the Goldfish, The Beast Inside, Devil Hopping as well as unleashing a best seller ‘Greatest Hits’ collection. Around this time the band played huge shows around the UK with shows at Gmex and Ally Pally and even got to headline the iconic Reading festival in 1991. The Bedford show is one of the first UK indoor dates the band have played in over 2 years, their last UK tour in 2012 saw sell out shows up and down the country including a sell-out show at Koko.

The Bedford show is an exclusive date as the band will be warming up for an appearance at the legendary ‘T In The Park’ Festival in Scotland the following night. The band will be playing the hits and classic favourites and will be also feature the first ever airing of a couple of songs from their new album which the band have been recording over the past year which will see the light of day later in 2014.

1st on guests are Bowfinger with a further special guest to be added nearer the time.

Tickets will also be available from Monday 10th March at:

Special guests to be announced soon!