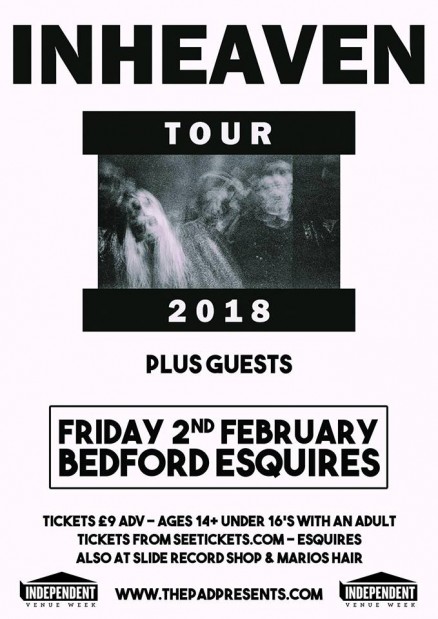 We are thrilled to be welcoming INHEAVEN back for a 3rd time to Esquires, and this year they join us as part of our Independent Venue Week #IVW188 celebrations!

Tickets are on sale everywhere Friday 24th November INHEAVEN want to be the kind of band you’d have patched onto your bag at school. The kind of band that changes your life when you’re a young teenager growing up – in whose music and ethos you want to invest beyond just adding a few tracks to your Spotify playlist. The kind of band they felt the music world was lacking when they decided to form a few years ago.

“I think there’s certain bands that come along and really change the way you think, change the way you look at the world” says vocalist and guitarist James Taylor, “and I think we just felt like that was missing again. I didn’t feel like there was a band that could really reach out to teenagers and help them out.”

So he decided to do something about it. After meeting bassist Chloe Little at “a really crap gig” and bonding over their shared taste in music, the pair embarked on an audio-visual project, recruiting their neighbour Jake Lucas on lead guitar and Joe Lazarus on drums. To test out their creative compatibility, Little put together a 30 second video of images and asked Taylor to write music over it. Things clicked into place pretty fast. “It was kind of like, ‘Something needs to change , we really need to take control of our lives and change things’ and I think you can hear that in the first recordings we did.”

There’s shades of Slowdive and My Bloody Valentine on the nostalgic, cinematic Regeneration – the first song Taylor wrote – though there’s a little more melody and a little more bite than the ‘90s shoegazers. Naming themselves after the infamous lady in the radiator scene from David Lynch’s Eraserhead, INHEAVEN wasted no time getting the word out – though in their own, unique way. They set up a mysterious website with hidden videos, made fanzines (band mood boards, which they still regularly produce), produced their own artwork on Microsoft Word, and sent their songs to blogs around the world. “I’m cringing remembering emailing all these people,” says Little, “because I didn’t know any of them, I just found out who they were and sent this email with big, bold capital letters and the videos. 50% obviously went straight in the junk – hopefully they’re kicking themselves now! But surprisingly, loads of people picked up on it.”

One of those people was The Strokes’ Julian Casablancas. “Rory Atwell, who mixed our first EP, forwarded me this email from Cult Records,” says Taylor, “and it said, ‘Us and Julian are loving these songs. Who are they? Where can we get a hold of them?” After a handful of correspondences, Casablancas’ label released INHEAVEN’s first single in America, and “from that point on it started rolling out of control.”

In a good way, that is. Now, after gaining support from NME, Q, The Independent and DIY, accumulating several hundred thousand YouTube views and Spotify streams, and – more importantly – accruing a loyal cult following, the band are opening for Circa Waves on tour. At the shows, Little says, “I get girls come up to me and say, ‘It’s so cool that you’re in a band’. I’d like them to not have to do that – to just think that it’s normal.”

“But I think it’s happening,” says Taylor. “At gigs I’ve noticed it’s not guys going crazy in mosh pits, it’s girls and guys together, jumping around just losing their shit. This new crop of teenagers, they’re just all in it together, as opposed to when I used to go to gigs, where it was just loads of sweaty big blokes with too much testosterone.” Little agrees. “Definitely the people who come to our gigs, from age 14 to 18, are way more politically aware than when I was younger.”Perhaps INHEAVEN’s own political bent contributes to the demographic of their crowds. Take Baby’s Alright, for example, on which the shoegaze influence has subsided somewhat. With a prominent bassline that evokes the arresting openings of bands like The Ramones and The Damned, and a rabble-rousing melody, the song feels like an anthemic call to arms. Or perhaps the opposite. “Bombs will drop and the world will shake / Don’t believe a word they say / Pull the trigger now or face your fate / In a messed up place where hate breeds hate.” The song, which Taylor calls a “simple three chord rebel song”, was written before Trump’s election – but it seems particularly potent now.

As does the band’s new single, Vultures, the video for which comprises crackling television screens, flashing up images of Theresa May and Donald Trump, demonic pigs, the US flag, Mickey Mouse, crossed out swastikas, and a woman with a gun to her head, on an endless loop. The loop was an experiment of sorts. “It disturbs me, the throwaway pace of music and art, things that people spend a long time creating,” says Little, “so WE had the idea of just doing a 30 second video just repeated, just looped, and just see if anyone would notice. WE wanted it to feel politically challenging of things that are happening now, but not necessarily saying, ‘This is right, this is wrong’.”

“It’s a barrage of nonsensical information,” adds Taylor, “because that is how everyone feels when they look at their phone all day. It doesn’t make your brain feel good. And there’s so much information at all time being thrown towards you it makes you feel sick sometimes. I guess that’s what you get from the video, it makes you feel a bit sick.”