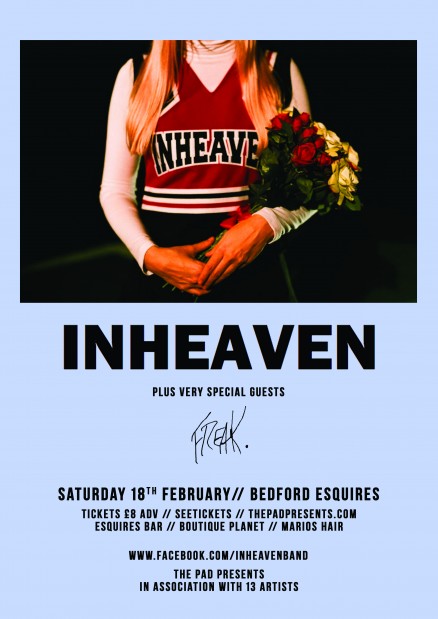 We’re very pleased to have INHEAVEN returning to us, a year after they played a low key date for us in room 2 at Esquires on Feb 19th 2016 (spooky!).

Fusing elements of 90s US indie to an innate British sensibility has seen INHEAVEN build a rapidly growing fan base. They were picked up nearly straightaway by none other than Julian Casablancas, who upon hearing them quickly signed them to a single deal with his label Cult Records. The single “Regeneration” was released and Stereogum said “INHEAVEN’s visceral, kinetic energy is assuming a life of its own”.

More recently the band have featured in the NME, who called them “one of the UK’s most exciting new bands” following the release of their previous single “Baby’s Alright”, an exhilarating anti-war song that was also the Guardian Guide’s track of the week. INHEAVEN just finished their biggest ever UK tour, having taken the festival circuit by storm in summer, and are out at the moment with Blossoms, playing some of their biggest shows to date.  Support comes from a band with alot of buzz around them at the moment too, with FREAK the UK tour support, don’t miss em!

Tickets are available from Seetickets and available locally in person from Esquires, Boutique Planet and Mario’s Hari Design. This is a 14+ ages show – Under 16 to be accompanied by an adult.