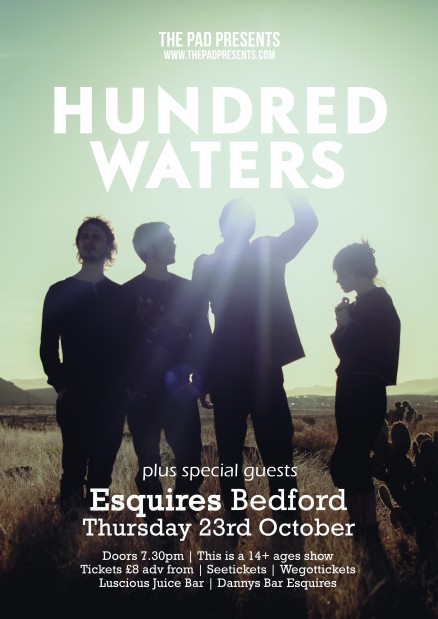 THE PAD PRESENTSwww.thepadpresents.comHUNDRED WATERS + Special Guests
After making one of the finest records of 2014, OWSLA signed Hundred Waters will be making a very rare regional performance on Thursday 23rd October.

This show is going to be one of the highlights of the year for us at Esquires, make sure you don’t miss this one. The most recent album was released just a month ago and scored 8/10 NME and 8.3 on Pitchfork. Signed to Skrillex’s own label, this shimmering Indie R&B will be like nothing Bedford will have seen before.

Hundred Waters’ members (Nicole Miglis, Trayer Tryon, Paul Giese, & Zach Tetreault) formed the group in 2012 when they became housemates in Gainseville, FL. The four found themselves inclined to collaboration while living under one roof, sharing a communal mentality that yielded a beautiful blend of musical contradictions: mournful yet colorful, introverted yet aware.

Their self-titled debut soon attracted the most unlikely of allies, Skrillex, who signed the band to his OWSLA label that same year and gave the album a full-scale release, leading to worldwide touring with such diverse acts as The xx, Alt-J, Grimes, & Julia Holter.

Tickets are £8 adv, more on the door