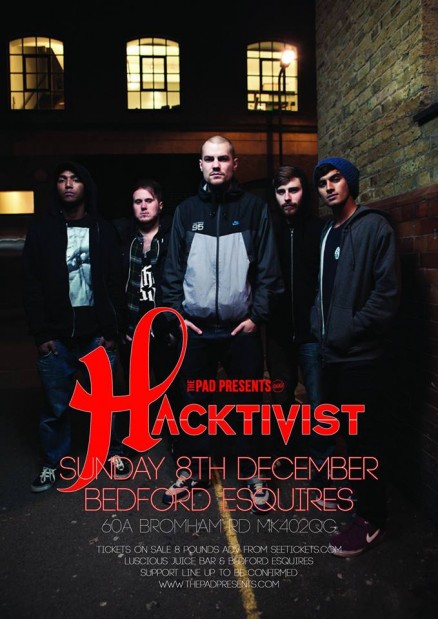 Hacktivist + The Algorithm + The Projectionist

Something on the heavier side for our next Pad Presents announcement, with upcoming MK based band HACKTIVIST visiting us later on in the year. These guys are one of the fastest rising bands in the UK right now and we have the closest show to their hometown, so pick your tickets up quick, before they get swallowed by the MK masses!

HACKTIVIST are a five piece from Buckinghamshire, UK, who fuse the groove, attitude and brutality of both metal and grime to create their sound.

At the back of 2011, guitarist / producer Timfy James was jamming ideas while friend / grime MC J Hurley was hanging out at his studio. A groove caught J’s ear, prompting him to spit some bars over a riff. The resulting mix energised them so much, they immediately got to work transforming the idea into a song. Feeling like the track needed something else, Timfy hit up a former band mate, vocalist Ben Marvin, to see what he could bring to the mix, and the resulting duel-vocal barrage over low-tuned heavy riffs was the birth of the HACKTIVIST sound. The line-up was completed when bassist Josh Gurner and drummer Rich Hawking joined the band at the start of 2012.

The band wrote and recorded the track “Cold Shoulders” and in January 2012 they posted a video (shot in their rehearsal room and edited by Josh) online. Within a week it gained over 100k views. “Cold Shoulders” continued to gain traction over the spring and demand for new music grew exponentially, so when the band dropped their second video “Unlike Us” in July, it was time for the whole rock world to take notice. “Unlike Us” gained radio support from BBC Radio 1, XFM and Kerrang! Radio, receiving numerous plays on their respective rock shows with Scuzz TV and Kerrang! TV picking up the video.

Following a selection of one off shows and small festival throughout the summer and autumn, HACKTIVST embarking on their first headline tour of the UK in November 2012 to coincide with the band’s debut self-titled  EP. The UK media highly praised the release, gaining the band support from Metal Hammer, Total Guitar, Rock Sound and Kerrang!, but also reaching beyond the “rock” world to hip hop title Insomniac and broadsheet The Guardian. The EP was also picked up by Indian national music magazine Rock Street Journal, who gave it away as a covermount CD on their January 2013 issue.

2013 will see the band tour extensively, grace festival stages across Europe and elsewhere, and release of a lot more music. Stay tuned.

Tickets on sale from seetickets and We Got Tickets

Pick up in person from: