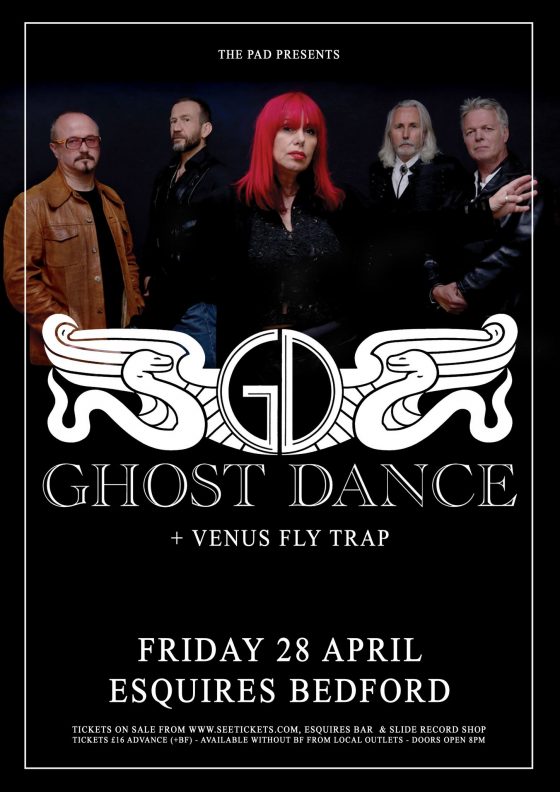 GHOST DANCE
+ Venus Fly Trap
8pm Friday 28th April, Bedford Esquires
On Friday 28th April we welcome back to Bedford Esquires the sounds of the almighty GHOST DANCE.
Anne Marie Hurst was the backing vocalist for the Goth Rock group the Elements in Keighley UK (until 1982). In December 1982, she helped form Skeletal Family. After departing from Skeletal Family in 1985, she co-founded Ghost Dance with Gary Marx (formerly of The Sisters of Mercy). Ghost Dance released several indie chart hit singles through Karbon Records, which were later compiled on the ‘Gathering Dust’ album. In 1989 they signed to Chrysalis Records and released the ‘Stop The World’ album and two more singles, with ‘Down To The Wire’ peaking at no.66 in the UK singles chart.
In 2019 Anne Marie reformed Ghost Dance with ex Harlequyn members, Tim Walker, Phil Noble and Dave Wood, then in 2020, Stephen Derrig (formally of Original Sin) completed the line up and work commenced on a new album. Both Harlequyn and Original Sin had played several support gigs to the original Ghost Dance line-up in the late 80’s. The new single ‘Falling Down’ was released on Voltage Records in August 2021.
Support for the evening comes from VENUS FLY TRAP
Tickets on sale priced £16 in advance from Seetickets from 10am from Friday 4th November and available in person from Bedford Esquires Bar and Slide Record Shop.