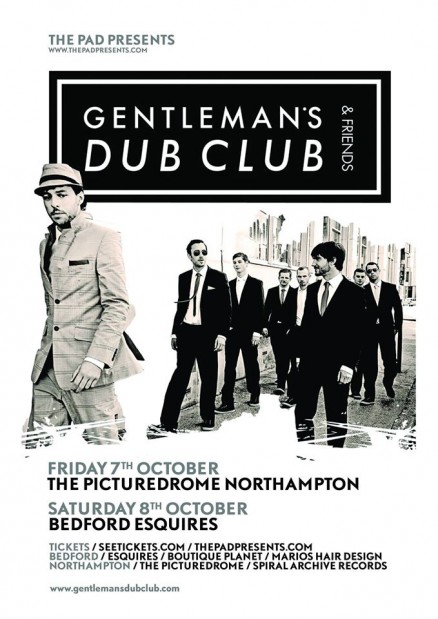 We are overly stoked to have secured a date with Gentleman’s Dub Club on Saturday 8th October on the main stage at Bedford Esquires!

Gentleman’s Dub Club is a nine-piece band that formed in Leeds in early 2006. They have an electronic style based in Dub, Ska and Roots Reggae and are recognised as one of the UK’s top bass music live acts.

The band built their initial reputation through live touring consistently delivering over 50 shows a year. Their first studio outing was the ‘Members Only’ EP that went in at Number 1 on the iTunes UK Reggae charts and was soon picked up by the BBC’s Radio DJs Sir David Rodigan and MistaJam.

Moving onto their next release ‘Open Your Eyes’, the band secured a live session at the BBC’s famous Maida Vale studios, which featured prominent Grime artist P Money. This resulted with Ian Huffman (Robbie Williams, The Gorillaz, The Specials…) to sign up as Gentleman’s Dub Club’s live touring agent at X Ray Touring. The band’s first studio album ‘FOURTYFOUR’ was released in 2013 and has securely remained in the iTunes UK reggae charts since release.  Gentleman’s Dub Club have finished recording their second full length album ‘The Big Smoke’due to be released in the winter 2015. Their first single from the second album ‘Music Is the Girl I Love’ was a huge hit and gave a taste as to the upcoming album’s success. Gentleman’s Dub Club have appeared on bills with acts including The Wailers, Enter Shikari, Clean Bandit, Sam Smith and DJ Fresh to name a few. Over the years the Band have performed at major festivals worldwide including Glastonbury Festival (UK), Fusion Festival (Germany), Ostroda Reggae Festival (Poland), Outlook Festival (Croatia), Sula Fest (India) and have headlined legendary venues such as London’s ‘Roundhouse’ (3000 cap) and Croatia’s ‘Pula Amphitheatre’ (7000 cap).

Tickets are £15 advance, we highly advise picking them up in advance for this one, on sale from Seetickets and locally from Esquires Bar, Planet Boutique & Mario’s Hair Design.