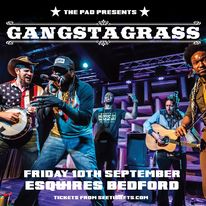 The Pad Presents
www.thepadpresents.com
GANGSTAGRASS + Guests
Saturday 18th June
Bedford Esquires
What do you get when you cross Bluegrass with Gangsta Rap?!
We are very pleased to be welcoming GANGSTAGRASS to Esquires in September as part of their UK tour.
A booking 4 years in the making, we were first sent a video of theirs in 2017 and knew that we needed to try and get them to the venue.
The band have racked up millions of Youtube and Spotify plays, packing out shows and festival tents before covid brought it all to a thudding halt. We shouldn’t need to sell this show to you, just give them a listen!
Here are our favourite comments on the band…
“When street gangs and hillbilly moonshiners sit down to talk, and they realize they have a lot in common”
“Who would have thought that two groups historically treated like dirt, kept poor, and played against each other by their society would have similar themes in their music?”
“Rap and bluegrass together, like a burger with cheese, doesn’t get more American than this folks.”

Support comes from RODNEY BRANIGAN The Texas-born troubadour who learned to play in Austin, perform in Los Angeles, craft songs in Nashville, and put it all together in London has played all types of music in all types of venues in his storied career. His adventurous, boundary breaking guitar playing (sometimes at the same time) earning him the title “The Two Guitar Man” has led to performance invites across America, India, Africa and Europe – and in fact, to headlining the 15,000 people Glasto Extravaganza after only being discovered the day before

“Rodney Branigan is one of the most amazing artists you will ever see. Not simply because he is unique, but rather because he is impossibly talented” Music Connection Magazine

“Leave to cross France from end to end, because this is what we call a real discovery. A contemporary musician as innovative as the Boulez was in his time” Paris Moves

“Every year there will be one or two artists that take the audience completely by surprise. This year Rodney Branigan was undoubtedly that artist, his name being mentioned in our feedback over and over again as peoples stand out act” John Marshall-Potter, FolkEast

————–
Tickets are on sale right now from Seetickets: https://www.seetickets.com/…/bedford-esquires/1852556
Ages 14+, under 16s to be accompanied by an adult
Full support line up TBA