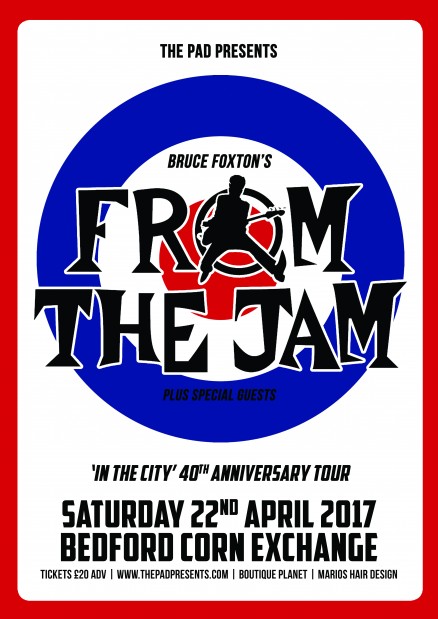 From the Jam: In the City 40th Anniversary Tour

FROM THE JAM ft BRUCE FOXTON

‘In the City’ 40th Anniversary Tour

In 1977 The Jam released their debut album “In the City”. Almost immediately they hit a nerve with the youth of their time 2017 marks the 40th anniversary of this seminal album.

From the Jam featuring original Jam member Bruce Foxton along with Russell Hastings will perform the debut album in it’s entirety on this one off, never to be repeated concert.

From The Jam have gained a reputation for the kind of incendiary ‘live’ performances that sealed the reputation of The Jam all those years ago. Those attending this gig can expect to hear alongside ‘In the City’ a vast selection of classic Jam hits such as Down In The Tube Station At Midnight, Going Underground, Town Called Malice and The Modern World

Earlier in 2016 From the Jam returned to the top 20 charts as Bruce Foxton and Russell Hastings released the band’s new album, ‘Smash The Clock’ much to the delight and anticipation of their loyal fans.

Always packing out the Bedford Corn Exchange in the past an early ticket purchase is advised on this, special guests will be announced nearer the date.

Tickets priced £20 can be picked up from in person Bedford Corn Exchange Box office now in the Harpur Suite and from their website. The tickets can also be bought from Planet Boutique and Mario’s Hair Design in Kempston and in Vinyl Revelations in Luton.