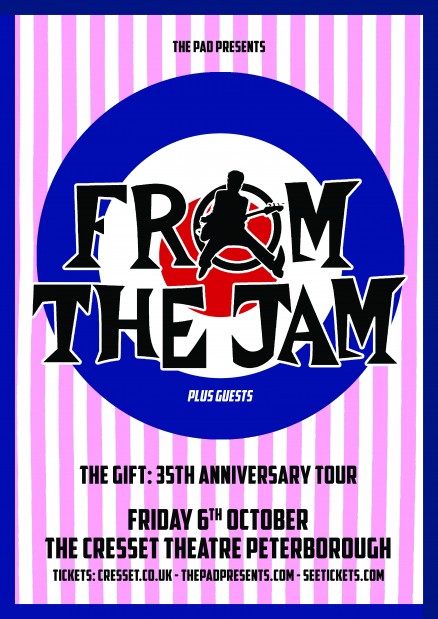 From the Jam – The Gift Tour

From the Jam ft Bruce Foxton – The Gift tour The Cresset Theatre, PeterboroughFriday 6th October 2017Doors at 7.30pmIn 1982 The Jam released their last studio album “The Gift”. Often cited as one of the band’s finest albums, “The Gift” featured singles “Town Called Malice”, “Just who is the 5 O’Clock Hero” and “Precious”. Now 35 years old the band are taking this album out on the roadFrom the Jam featuring original Jam member Bruce Foxton along with Russell Hastings who will perform this incredible album in its entirety on this one off, never to be repeated concert.From the Jam will also perform a selection of classic hits and albums tracks following the “The Gift” album. The band have gained a reputation for the kind of incendiary ‘live’ performances that sealed the reputation of The Jam all those years ago.
Those attending this gig can expect to hear masses of classic Jam hits such as Down In The Tube Station At Midnight, Going Underground, Town Called Malice and The Modern World and many more.

No strangers to Peterborough, the band played to a packed out hall in June 2016, securing themselves as a firm favourite on the touring circuit. This is a concert any self-respecting fan of The Jam will not want to miss.

Tickets are £22 in advance.
This is a standing show