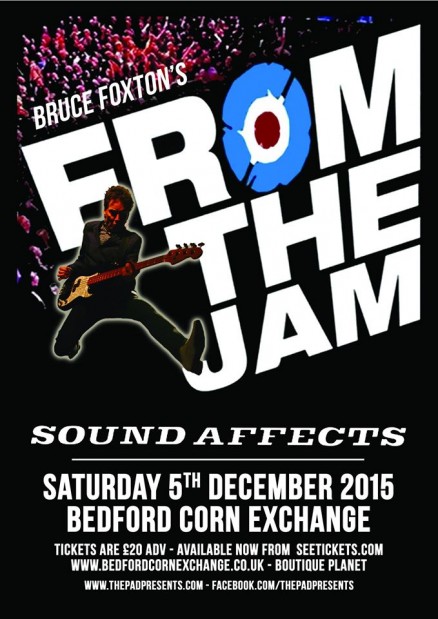 From the Jam featuring original bassist Bruce Foxton along with Russell Hastings and Smiley on drums deliver a stunning recreation of The Jam live.

In November 1980 The Jam released their fifth studio album ‘Sound Affects’ featuring their second single to reach the number one spot ‘Start!’ and the acoustic masterpiece ‘That’s Entertainment’ considered to be one of the 500 greatest songs of all time by Rolling Stone. This album often competes for the title of their best record due to its mix of 60s psychedelic rock and funk alongside a political commentary that was innovative for its time.

Celebrating the album’s 35th anniversary From The Jam will perform the album in its entirety. As well as a thrilling performance of ‘Sound Affects’ the audience can expect From The Jam to perform a selection of hits and album tracks from The Jam’s back catalogue and songs from Bruce Foxton’s own solo career.

No strangers to Bedford, this is the 4th visit to the Corn Exchange that has seen a packed house every time they have played, with Sound Effects being an all time Jam fave we would expect no different this time round.

Children under 16 must be accompanied by an adult and seated in the balcony.