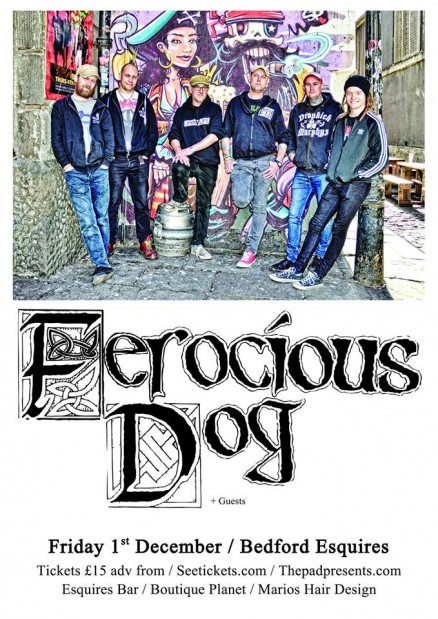 “FEROCIOUS DOG are the music business’ worst nightmare – a great band who are going to make it without anyone’s permission” – John Robb, Louder Than War

No way this band is following hipster templates – fronted by a big burly man with a mohican who sings impassioned political songs of broken Britain whilst his band seethes like a punky Levellers. A band that has the talent and passion to go on to dominate the folk/punk music scene!

A full-on six-piece sound of folk infused with rock, reggae and Celtic vibes. They can go in hard to get you moving and then slip in to blissful melody or dub-like fusion.
Dan Booth, on fiddle, and John Leonard, playing just about everything with strings, bring intricacy to a breakneck pace. Les Carter (ex Carter USM) on guitar and the rhythm section of Alex Smith and John Alexander tie the whole thing together, and with Ken Bonsall’s lyrics and, let’s be honest, sheer bloody likeability, you have a whole greater than the sum of its parts.

2016 was a defining year for Ferocious Dog. From playing Billy Bragg’s Left Field stage at Glastonbury in front of a massive crowd, to sharing the stage with The Levellers on their sold out European and UK tour and many sold out shows in-between as well as becoming the first unsigned band to sell out the Rock City in Nottingham. The spring tour in 2017 sold out all over the UK and as the word spreads they are winning over an allegiance of new fans up and down the country. The bands last visit to Esquires in 2015 saw a very busy room so an early purchase of tickets is well advised.

Tickets are on sale now priced £15 in advance from Seetickets and are available in person from the 20th May (booking fee free) from the outlets of Esquires Bar, Planet Boutique & Mario’s Hair Design in Kempston