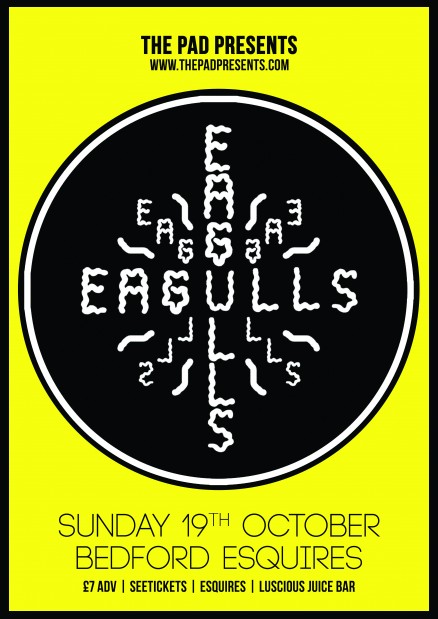 We are very pleased to announce that we have secured a date with one of the hottest bands in the UK right now – Eagulls will be visiting Esquires on Sunday 19th October.

The band were previously booked to play for us with Merchandise last August, but a van break down on the way out of their home town Leeds saw them unable to play. We’re over the moon to have a second chance to promote them, now with a critically acclaimed debut album under their belts and a ton of hype for good measure.

Eagulls were formed in 2010 and released their first single ‘Council Flat Blues’ on Moshi Moshi imprint Not Even Records. The band’s 2012 self-titled EP, recorded by MJ of Hookworms, was released on both London’s Sexbeat label and canadian label Deranged Records. In 2013 the band signed to Partisan Records, releasing 7″ single “Nerve Endings” with a cover of Killing Joke’s ‘Requiem’, and 7″ single ‘Tough Luck’.

The Post Punk 5 piece are a strange beast in that they have been given as much attention on the other side of the pond as they have in the UK, with Pitchfork, US Vice and SXSW showing them early love, before they had even released an album. This culminated in a special performance of ‘Possessed’ on the David Letterman show.

Steve Lamacq also claimed them as his favourite new band of 2013 and the recently released debut album has been getting rave reviews everywhere – Come see what all the fuss is about in the intimate surroundings of Esquires.

We expect this show to sell out, so advance purchase of tickets is highly recommended.

Tickets are on sale now from:

Full support line up to be announced soon