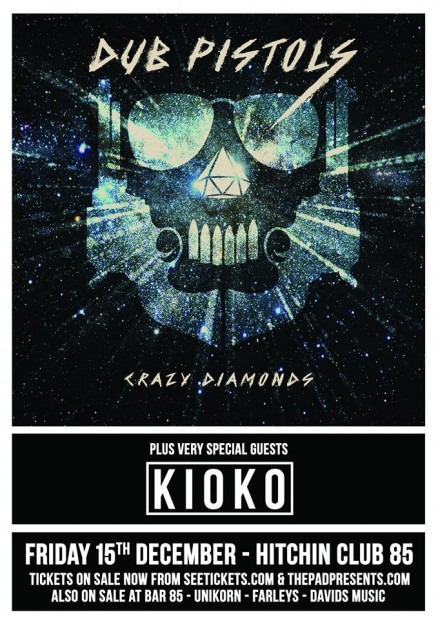 As they gear up to celebrate 20 years of riotous marauding, the Dub Pistols are prepping their seventh album Crazy Diamonds in 2017 and there’ll be a documentary about the band dropping at some point in the year, too. And they’ll be out on the road, as usual, of course — the hardest working band in showbiz – Heading back to Hitchin Club 85, for their now legendary Xmas show to wrap up the tour!
A kinda 21st century equivalent of 2-Tone acts The Specials or The Beat, the Dub Pistols are the quintessential festival band. Coming over a bit like if King Tubby and The Skatalites bumped into Terry Hall at a Goldie gig, the Dubs have reached their two decade milestone with a lot of ups and downs along the way.

They’ve worked with vocal legends like Rodney P, Busta Rhymes, Gregory Isaacs, Terry Hall, Lindy Layton, Akala and Horace Andy, while the band’s mainstays are fiercely loyal and dedicated. An unorthodox collective of musicians who each have their own personal interests and solo projects, when they come together to form the Dub Pistols some dubwise magic happens.

The rhythm section of Jack (drums) and Dave (bass) are granite-solid, and guitarist Andreas (or sometimes the rock & roll stand-in, Johnny Rockstar) provides all sorts of licks and skanking chords to nice up the dance. The brass section is on fire, and rapper Seanie Tee brings the mic skills to complement main man Barry Ashworth perfectly. They’re a proper gang of outlaws, rebels with a cause, renegade outsiders who know how to bring the good times.

Support on the night comes from Kioko, a truly excellent band we had the pleasure of putting on earlier this year too – Check em out! ——————– We highly advise picking up tickets in advance – Last year sold out! Tickets are £14 adv on sale here: Tickets also available from our usual local sellers.