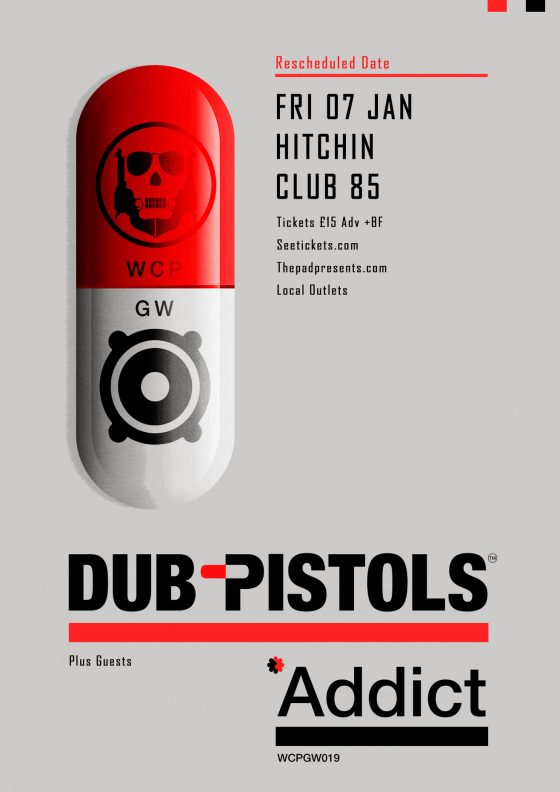 ** This show has been rescheduled from Saturday 12th December 2020, all tickets remain valid / now moved to Friday 7th January due to one one of the party testing positive for Covid – tickets still remain valid or you can get a refund at the point of purchase – the show must go on! here go again !

We are pleased to announce the return of Dub Pistols for their annual sell out Xmas skank up at their hometown show at Club 85 on Saturday 11th December!

2020 is going to be off the chain for the Dub Pistols. With a new album (‘Addict’) coming out in 2019, a documentary and even their own festival, Barry Ashworth’s merry gang of outlaw reprobates are simply unstoppable.

The Specials and the 2-Tone movement brilliantly reflected the multi-racial nature of the UK’s inner cities back in the day. The Dub Pistols are like a 21st century equivalent — a riotous collision of drum & bass, hip-hop, ska, dub and punk. One of the most exhilarating live bands on the circuit, these festival favourites have survived international terrorism, inter-band warfare and the wheels falling off their operation numerous times. Now a slickly drilled outfit, they’ve nevertheless lost none of their kick-ass vitality and renegade edge wherever they rock up to play.

Dubbed ‘the hardest working man in showbiz’ by music industry peers, Barry has worked in music all his adult life. An Ibiza original who had his life changed by acid house, he started running club-nights in London and had soon formed a band, Deja Vu, who arrived during the Flowered Up/Happy Mondays ‘baggy’ era.

When Deja Vu split, Barry started DJing — badly, at first — and the Dub Pistols formed out of some of these madcap DJ sessions. The last two subsequent decades have been a riot of storming shows, missed opportunities, big bad basslines, calamities and triumphs — with scarcely a dull moment.

The first Dub Pistols album, ‘Point Blank’, came after Barry and one-time production partner Jason O’Bryan had signed to Concrete, a subsidiary of DeConstruction Records. Early single ‘Cyclone’ dented the UK Top 40, and other tracks like ‘Westway’ and ‘There’s Gonna Be A Riot’ had enough going on to land a US record deal with the mighty Geffen Records.

Constant touring of the States followed while they readied their second album — although disaster struck just as it was about to be released. The 9/11 terrorist attack in New York meant that the album — which referenced international geo-politics in a no-nonsense fashion — had to be temporarily shelved.

Returning to the UK with their tails between their legs, Barry and co set about rebuilding their career. They hooked up with ex-Specials singer Terry Hall and roots reggae great Horace Andy for tracks on ’Six Million Ways To Live’ (ska cut ’Problem Is’ and ‘World Gone Crazy’ respectively), which kicked off their long association with assorted guest vocalists. Soon they were touring with Terry Hall and UK hip-hop don Rodney P, and producing their most accessible album to date, ’Speakers & Tweeters’ — which included a cover of ‘Gangsters’ by The Specials, a live fave, and ‘Peaches’ by The Stranglers.

At one of their big live shows, the ant-racism festival Rise in London in 2007, they were not only joined by Terry Hall on vocals but also another Specials mainstay, guitarist Lyndal Golding. The rapturous reception that ‘Gangsters’ received was instrumental in The Specials getting back together the following year — and in turn they asked the Dub Pistols to support them for some of their comeback tour.

The Dubs themselves nearly fell apart, Happy Mondays style, while recording their next album ‘Rum & Coke’ in Barbados the following summer. “Our gear got pawned off, members of the band were locked up, the wheels came off — everything we did was just about partying and enjoying ourselves,” Barry recalls.

After the turn of the noughties they returned to more political fare with their ‘Worshipping The Dollar’ LP — featuring vocalists such as Akala and Rodney P — and introduced more of a drum & bass sound into their live sets and new songs. As the decade progressed they cemented their place as one of the mainstay festival bands in Europe — guaranteed to rock the house every single time. Their list of collaborators now reads like a who’s who of conscious lyricists.

The Pistoleros also have a documentary coming out about them, WCPGW?, and also their own festival in September — Mucky Weekend, named after one of their most popular live tracks. “I’ve always wanted to do my own festival, having come from a promoting background,” says Barry. “God-knows if I’m just being an idiot, but I’ve been to enough festivals in my time to know what makes a good festival. I’ve helped so many people with their festivals, so it seems only natural to do our own thing now as well.”

Support from Hitman – get down early !

Tickets on sale from Seetickets  and from from local outlets when they reopen.