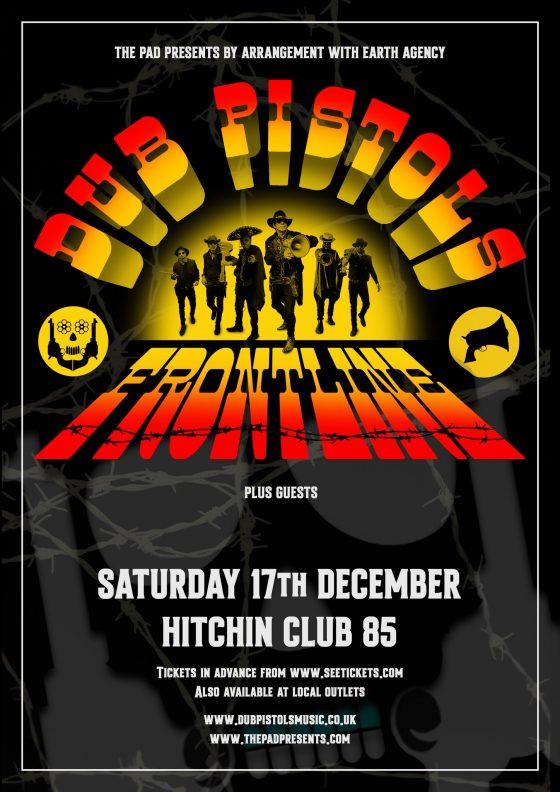 Dub Pistols return to Club 85 in Hitchin for their annual live Christmas show. This year the band are touring their brand new album FRONTLINE so expect a few cuts from this as well some of the bands legendary bangers !

Readying the release of what will be their ninth studio album, DUB PISTOLS are delighted to announce a full UK & Irish tour this Autumn.
Plotting a stretch of shows, the ‘Frontline’ tour will see the electronic/dub icons previewing material from their upcoming album of the same name.
Kicking off at Guildford’s Boileroom on 30th September, with dates in Belfast, Dublin, Manchester, London and Cardiff, the sixteen-date run winds up with a pre-Christmas fixture at Hitchin’s Club 85 on 17th December 2022.

Speaking about what to expect from the upcoming tour, lead Pistol Barry Ashworth says:
“I can’t wait to hit the road again with a new album and a new show. Saddle up, the Pistoleros are
riding into a town or city near you…”

With the band having so many sell out shows at the venue we strongly advise picking a ticket in advance.

Tickets priced £17 are available from Seetickets online from Friday 29th at 10am and will be available in person from Bar 85 at the venue from 1st August.