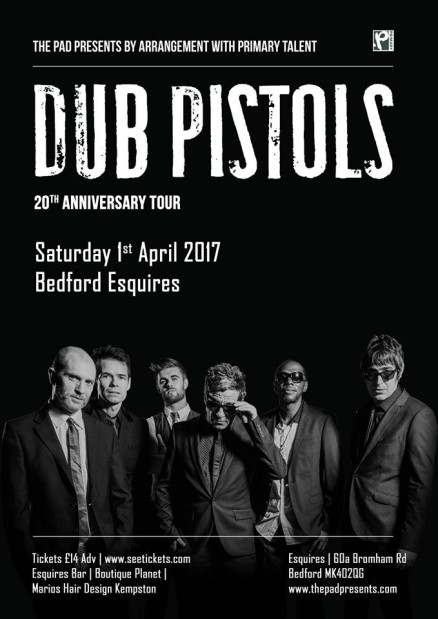 As they gear up to celebrate 20 years of riotous marauding, the Dub Pistols are prepping their seventh as-yet-untitled album in 2017 and there’ll be a documentary about the band dropping at some point in the year, too. In the meantime And they are out on the road this spring, as usual, of course and return to Esquires following on from 2015’s sell out gig — the hardest working band in showbiz.

Over their career the Dub Pistols have worked with heroes like The Specials, Busta Rhymes, Horace Andy, Madness and Gregory Isaacs. A kinda 21st century equivalent of 2-Tone acts The Specials or The Beat, the Dub Pistols are the quintessential festival band. Coming over a bit like if King Tubby and The Skatalites bumped into Terry Hall at a Goldie gig, the Dubs have reached their two decade milestone with a lot of ups and downs along the way. They´ve burned through different members and hundreds of thousands of pounds on assorted capers and hedonism. It should have been a recipe for oblivion, but the band that started out in the mid-90s with Barry DJ´ing while musicians jammed over the top has metamorphosed into a mighty reggaematic bass-driven live machine, a super-tight festival regular that keeps winning over new fans at Glastonbury, Bestival, Beat-Herder and across Europe.  “To be honest it doesn’t feel like 20 years’’ says frontman Barry Ashworth, “Much of it has been a blur and hard to remember, you just keep going — looking forward — and then one day you stop and look back and go, ‘Wow where did the time go?’ So much has happened, so many ups and downs, so many lifts off into space and then crash on re-entry.”  Tickets on sale now – Long may the Pistols continue to mash up the place! Special guest support TBC + dj to be added. Doors: 8pm, £13 advance, available from online from the 25th November from online from Seetickets and in person from Esquires Bar, Planet Boutique in Bedford, Mario’s Hair Design in Kempston and Vinyl Revelations in Luton.