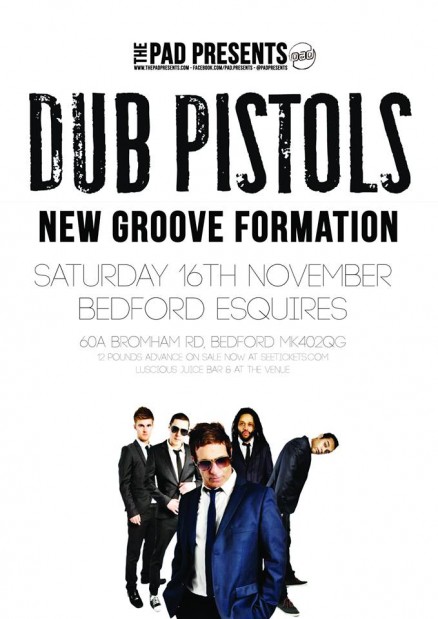 Festival favourites and party-rockers, the Dub Pistols – led by main man Barry Ashworth – are a national treasure. The London-based ska-dub-punk-hoppers have been active for 15 years, causing dancefloor uproar wherever they go, and continue to tour into 2013 with their fifth album ‘Worshipping The Dollar’ ready to go.
The evolution of the Dub Pistols has been fascinating to watch since they first bust out in 1996 as fully-formed party animals declaring ‘There’s Gonna Be A Riot’. While their live show continued to whip up unbridled mayhem and build a healthy worldwide following through relentless touring, the records took their own path, moving swiftly on from initial big beat whoopee into celebrations of two lifetimes of musical obsessions, the reggae-punk implications of the Dub Pistols moniker just the launch-pad.
The Dub Pistols formed in the mid-90s out of the chaos and energy erupting from the Heavenly Social-spawned big beat scene. Barry Ashworth had been in indie-dance outfit Deja Vu, who scored with their cover of the Woodentops’ ‘Why Why Why’, and initially hooked up with Jason O’Bryan who was half of Wall Of Sound duo Ceasefire with noted reprobate Derek Dahlarge. The pair appreciated the vast musical earthquakes going back to the late 50s when ska was born, determined to mirror their wildly-diverse tastes in similar fashion to heroes like The Clash and Specials, who spectacularly broke out of punk’s confines to embrace other musical forms like reggae.
The first Dub Pistols singles appeared on Deconstruction offshoot Concrete, roof-raising outings like ‘…Riot’, ‘Cyclone’ and ‘Westway’.
Soon their live shows were turning into much more than decks, DATs and the odd cheerleader. A full Dub Pistols live band booted off, swiftly blowing up in the US while back home in the UK they sometimes had trouble detaching themselves from the big beat aftermath. 1998’s debut album, ‘Point Blank’, helped, hoisting Barry and Jason into remix work which included Moby, Ian Brown and Crystal Method [most recently Lily Allen] plus video games and soundtrack work, including a track for ‘Blade 2’ with Busta Rhymes.
Second album, ‘Six Million Ways To Live’, stomped on any remaining big beat associations as former Specials singer Terry Hall repaid the endless homaging by appearing on the ‘Problem Is’ single, dubbed “the best Specials ska single the Specials never wrote”. Terry all but joined the group, going on to appear on several tracks on third album ‘Speakers& Tweeters’, including his own ‘Gangsters’ and an audacious version of Blondie’s ‘Rapture’.
At the time the album was hailed as an ultimate consumation of the Dub Pistols’ multi-hued aural graffiti wall; a live timebomb. It also marked the beginning of a fruitful relationship with Rob Da Bank’s label Sunday Best “Signing with them was the best thing we’ve ever done,” grins Barry. Job done, they then took a different tack on ‘Rum & Coke’, their most chart-friendly album to date. With a startling array of guests, including cool ruler Gregory Isaacs, Beats International’s Lindy Layton, acid house pioneer Justin Robertson and Ashley Slater of Freak Power, they refined the multi-hued excursions of previous album ‘Speakers & Tweeters’ and emerged as a cutting-edge modern pop group without losing the danger, humour and mania.
When The Specials reformed, much to Barry’s delight, the Dubs were invited to support the ska legends for their Brixton Academy shows, and they held over a couple of tracks recorded with Terry Hall for their fifth album – scheduled for a release at the end of 2011. Album No.5 is also set to feature long-time collaborator and UK hip-hop legend Rodney P, Larry Love from Alabama 3, superb London hip-hop kru the Foreign Beggars, and Lindy Layton once again.
Meanwhile, the ‘Re:Hash’ album – released May 2011 – features remixes of classic Dubs cuts by the likes of ex-Leftfield man Paul Daley, Matthew ‘Bushwacka’ B, one half of the acclaimed Layo & Bushwacka duo, and Wrong Tom, who has just released an album of dubwise reworkings of Roots Manuva’s back catalogue, as well as underground DJ/producer hotshots such as Ben & Lex and Kouncil House.
With a back catalogue to be proud of, the Dub Pistols’ punky-reggae party rages on, firing sugar-coated bullets at any recession depression.
Few bands can raise a roof or ignite a festival crowd with more rabble-rousing aplomb than this crew..
‘Worshipping The Dollar’ – Press Quotes
“The Dubs truly cement their place amongst the great British outlaw acid house bands”
DJ Mag 9.5 /10
“Big beats, big breaks, big bass, big smile!”
Clash
“Their mastery of reggae’s most uptempo aspects and hip-hop beats makes them late-afternoon bankers”
Q Magazine
“This is social commentary to dance to”
Daily Record
“A powerful and infectious summer listen, worship Dub Pistols”
Big Cheese 4/5
“An album full of sound system bangers”
Toast
“Dub Pistols have festival goers ready to greedily eat from the palm of their hand”
Big Shot

Tickets go on sale on Friday 19th July priced £12 via Seetickets and will be on sale from all the other outlets on Tuesday 23rd July – Support: NEW GROOVE FORMATION