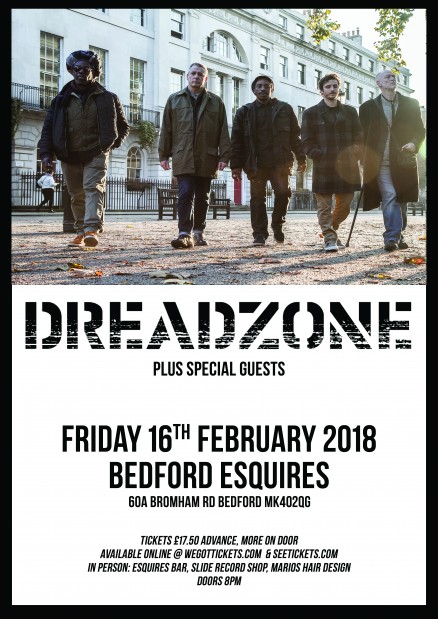 Entering an impressive 3rd decade, Dreadzone, one of the most energetic, exciting and powerful live bands to emerge from the post-rave scene, released a brand new album “Dread Times” in February which stormed into the Top 40 UK Official Album Charts on release – the first time the band have charted in over 20 years. The album also made the Top 10 in the Indie and Dance Charts.

Their old skool dread sound comes bubbling to the surface on this album and it digs deeper into their dub and reggae roots whilst still keeping the beats fresh and the textures electronic. Conscious lyrics, social ills, matters of the heart and mind merge with 21st century dubwise flavours. The album is an eclectic rolling journey that recalls elements from an illustrious 23 year history while always looking ahead to the next phase. ‘Dread Times’ is the band’s 8th studio album and the 3rd release on their own Dubwiser label. Since their inception in 1993 Dreadzone have steadily been releasing underground storms of albums, progressively bettering, refining and perfecting their own unique and inimitable take on dub – mixed as it is with aspects of dance, sublime guitar riffs, folk roots sentiments and breakbeat bass styles – whilst bringing the party to every club, dancehall and field they’ve shown up at. Always blowing audiences away and steadily earning for themselves the best possible reputation as a live act in the process.

No strangers to Bedford we think this is the bands 4th visit to Bedford with 3 past sell out shows at Esquires.

Under 16s must be accompanied by +18s