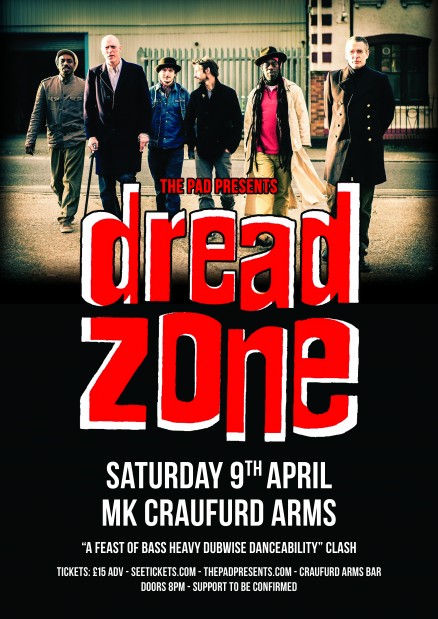 DREADZONE + guests The Blinding
The Craufurd Arms, Wolverton, Milton Keynes
Saturday 9th April
Dreadzone make a welcome return to the Milton Keynes area after an absense of nearly 4 years making their debut at the Craufud Arms.Tickets on sale now priced £15 advance, special guests tbc:Seetickets: http://www.seetickets.com/event/dreadzone-09-04-16-craufurd-arms-mk/the-craufurd-arms/925038“One of the few acts to have truly explored the
possibilities of Dub & Reggae” Rock Sound…

Electro-dub pioneers Dreadzone re-issued their classic 2001 album ‘Sound’ on their own Dubwiser label this Summer. Dreadzone are still going strong after over 20 years in the game with core members Greg Dread, Leo Williams, MC Spee and legendary reggae vocalist Earl 16 alongside Chris Compton on guitar and Bazil completing the current Dreadzone line up. They continue to tour extensively throughout the UK & Europe, and this re-issue is being accompanied by an extensive set of tour dates this Autumn and into Spring 2016.

Dreadzone formed in 1993 when the former Big Audio Dynamite rhythm section; drummer Greg ‘Dread’ Roberts and bassist Leo Williams teamed up with musician, producer and mixer Tim Bran. Throughout the 1990’s Dreadzone had continually remixed itself; chopping and changing members and record labels (including stints on both Virgin and Alan McGhee’s Creation). Greg and Tim decided to approach the new millennium with a fresh idea in the form of the Dubwiser Club night at Notting Hill Arts Club. They channelled their energy into club nights that fused dub and reggae with contemporary beats to create the perfect soundtrack for people from different planets. This proved a fertile musical playground and it was in this climate (helped by their new ‘Dread Central’ studio complex) that the band would create Sound, released on Ruff Life in 2001.