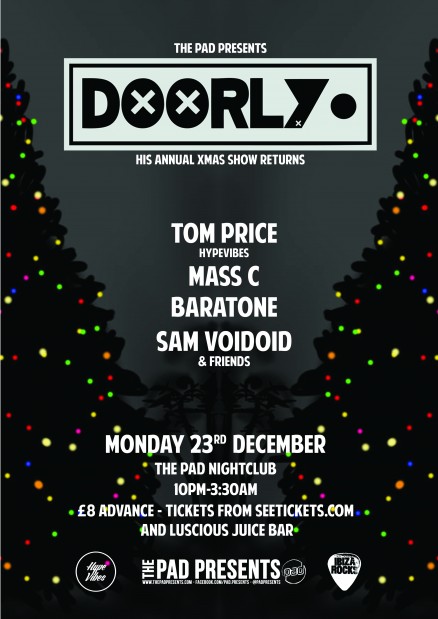 DOORLY IS BACK! One of our favourite DJ’s returns to The Pad for the 4th time this Christmas for one of his now legendary annual shows.

More used to playing 2000, not 200 capacity venues, we are over the moon that he has decided to come and spread some xmas joy amongst us once more!

Presiding over an electronic melting pot of techno, electro, Future Garage, drum’n’bass and dubstep doused with hip-hop and splashes of indie; Doorly’s movement behind the decks is relentless.

His first big break came in April 2008, when Doorly was invited by Pete Tong to spin live on BBC Radio 1’s Essential Mix as part of the ‘In New DJs We Trust’ Introducing Tour, leading to spots on the Radio One Stage at Creamfields and the Radio One
Ibiza Weekend where he has hosted the main stage 2 years running.

In turn, Doorly landed residencies at Wax: On, Metropolis and Ibiza Rocks where he also now presents the Ibiza Rocks Podcast. More recently, he’s also added Manumission’s new Ibiza techno / dubstep creation “Reclaim the Dancefloor” @Eden (A night that he also programmes) to the list and earned a regular place on
Radio One’s ‘Annie Mac presents…’ tour; as well as Zane Lowe’s “DJ Hero” tour and regular upcoming sets for some opf the UK’s leading clubs including Chibuku & Manchester’s “Warehouse Project”. With him, his usual epic DJ set up: 3 CDJs, 2 x
1210s, an EFX unit and a Pioneer 800!

On the production front, Doorly’s now slouch either with remixes for artists including the likes of Dizzee Rascal, Basement Jaxx, The Prodigy, Calvin Harris, Groove Armada, Kanye West, Marina & The Diamonds and Mstrkrft. All crafted in Doorly’s inimitable,
genre defying style, from techno and disco through electro to dubstep & back again.

Doorly’s remixes have earned heavy radio 1 spins from the likes of Annie Mac & Pete Tong, Zane Lowe, Rob Da Bank & Annie Nightingale as well as being an omnipresent force at the top of the Hype Machine charts.

ALL WE KNOW IS – DOORLY = PARTY TIME. This is the Xmas show that you don’t want to miss!

Supporting on the night we have some of the finest DJs for your listening pleasure, mixing the night up anywhere between Electro, Old Skool Hip Hop, Ghetto Funk, House and D&B.

Tickets are £8, available now in advance from: