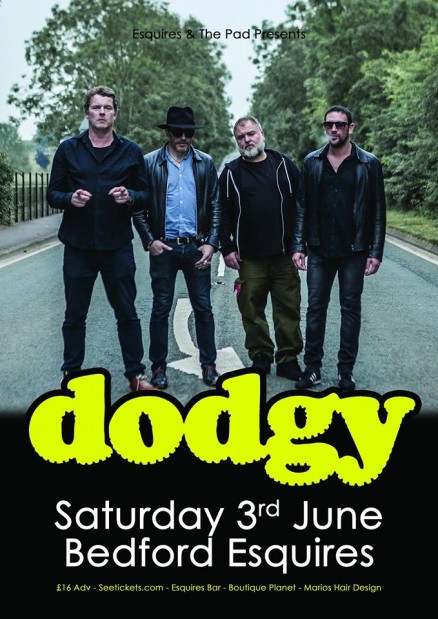 One of the best bands of the indie/britpop era, Dodgyare coming back to Bedford Esquires for the first time since 2013, playing the main stage on Saturday 3rd June.

Dodgy were originally together for seven years and in that time, released three albums totalling over a million sales worldwide and had 12 Top 40 singles, including Staying Out For The Summer, If You’re Thinking Of Me and Good Enough. Dodgy sold out the Brixton Academy for three nights in a row and were awarded an unprecedented 90-minute Saturday evening slot on the Pyramid stage at Glastonbury Festival.

Since they have been back together, Dodgy have played an extremely successful set of reunion shows culminating in an overwhelming finale at the Shepherds Bush Empire. Like prodigal sons, they have been welcomed back to the festival circuit with open arms and were asked back to play Glastonbury once again.

Their previous performances here sold out, so we strongly advise getting tickets in advance!Tickets are £16 advance, on sale now from Seetickets and the regular outlets of Esquires Bar, Planet Boutique and Mario’s Hair Design.This is a 14+ ages show, under 16s to be accompanied by an over 18