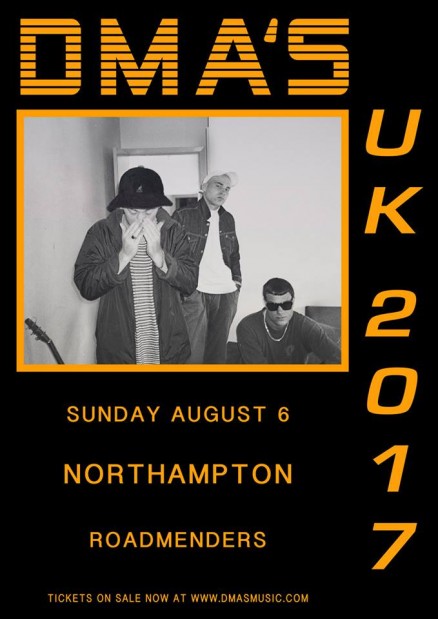 DMA’S is Johnny Took, Matt Mason and Tommy O’Dell – three friends who came together making nostalgic garage pop in a bedroom in Newtown, Australia. Since the release of their brilliant debut album ‘Hills End’, DMA’S have not stopped for a second. From playing the coveted secret slot at Glastonbury, to smashing it on the Late Show with Stephen Colbert, to having ‘Delete’ added to BBC Radio 1 A Rotation – the band have certainly shown the world just what all the fuss is about!

DMA’S have been selling out shows across four continents, and playing on the bills of the world’s biggest festivals including Coachella, Glastonbury, Lollapalooza, Reading & Leeds, Splendour In The Grass, Laneway, Bonnaroo, Osheaga to name but a few. No strangers to the area the band have racked up consecutive sell-out shows in both Milton Keynes & Bedford as well as their debut at the Roadmender in the summer of 2016.

£13 advance tickets on sale Monday 19th June at 10am from Seetickets and the Roadmender Box Office.

We will be running a coach from Esquires, Bedford on the day, ticket link for coach can be found on Seetickets.

“…the euphoria they evoke at this packed show is undeniably special.” – NME