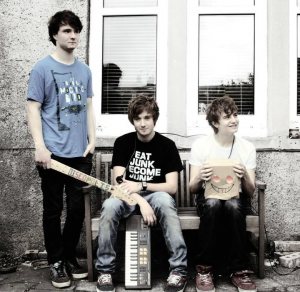 THE PAD PRESENTS – DISCOPOLIS + guests + Crap Crab
We’re serving up a healthy dose of soaring electronica with current Radio 1 playlist botherers DISCOPOLIS coming to smash a show for us after a Vice party showcase the night before (Lets hope they make it!) … At the start of the year they were voted number 9 in the ’20 most exciting bands of 2013′ NME feature, it’s taken them a little while to get going, but get going they have. Current single ‘Falling’ has just been released on SHM main man Axwell’s record label ‘Axtone’ and Zane Lowe has been playing it nightly for the last week or so too, thundering the single up the playlist request chart.
The Edinburgh 4 piece are often compared to early MGMT, Naked & Famous and M83 and in the last year they have played support to Metronomy, Friendly Fires, Django Django & Wild Beasts. With this new release the band have just come into their own, and are being booked up to play all of the major European festivals this summer.
We have only just secured the date for this one in and we’re putting together a strong supporting cast, so look out for announcements soon.
“The band have captured the unlikeliest of hearts, and with any luck, they’ll soon be after yours too…” NME
Discopolis are being supported by Crap Crab, “Fou…r humanoid write-off’s who should know better playing Post Roller-Disco, Instrumental Party Jams for your booty shaking pleasure.” Also we’ve just added a young lad called D-DOTs, a DJ and Producer who’s going to be dishing something very different up on the night with a live performance.
———————
Tickets are just £6 adv for this one and are available from: Luscious Juice Bar – Bedford Danny’s Bar, Esquires – Bedford
————————
Doors open 8pm
THIS IS A 14+ AGES SHOW – Under 16’s to be accompanied by an adult
FREE AFTERSHOW PARTY (18+) – At The Pad, 2 Lurke St, Bedford