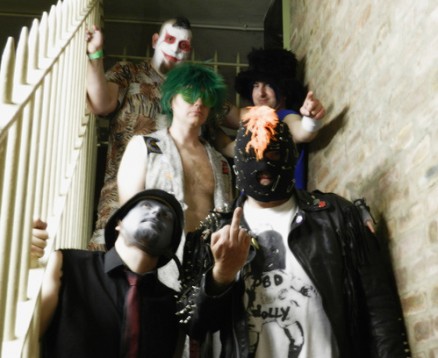 + Special Guests: SICK ON THE BUS

To keep the winter blues at bay we thoguth it would only be too kind to stick a little punk fest on at Esquires this coming November so we have pulled together a cracking line up for the first instalment with a further 2 bands to be added to the bill.

Headlining – DIRT BOX DISCO – Born in the UK from the malfunction of a terrible musical chemical laboratory experiment!    DIRT BOX DISCO are now free to roam from city to town, spreading the sonic filth to anyone that will listen, and people do listen! and they like what they hear, they like what they see! pure entertainment in every word! can you look at them and not think WTF? NO! but they will titillate you into submission with a cascade of verbal and visual pleasure! that is a definite! are you ready to rock n’ roll? are you ready for Dirt Box Disco?

From filling the main room at Rebellion Festival in their own right to packing the pubs and clubs up and down the country to giving Stiff Little Fingers a run for their money at Bedford Corn Exchange late last year we welcome DBD to Esquires for their debut show.

Special guests for the evening for the evening need no introduction as SICK ON THE BUS make a welcome return to Esquires for the first time in a couple of years and play the the main stage which in our calculations they have not played for 10 years! The UK’S Loudest punk band.

No line up would be complete without The Tendons barging on the bill, part of Bedford punk history the boys like  SOTB they get the full stage treatment upstairs.  A further 2 bands are set to open up the 5 band bill.

Doors open at the earlier 7pm tickets on sale via seetickets and we got tickets priced £8 advance, in person from Dannys Bar at Esquires.